If you like high-speed thrills and motorbikes, then MotoGP is the sport for you. If you know anything about the sport, you will know that the champion titles, for the most part, have been dominated by Valentino Rossi and Marc Marquez since 2001. Between the two, they have managed to steal over thirteen wins to cement themselves as two of the greatest riders. However, this doesn’t mean that there aren’t other notable characters to mention, with one of them holding the record for the most title wins. Throughout this article, we will let you in on the top nine MotoGP riders. Let’s dive right in.

Giacomo Agostini raced towards his fifth championship win more than 50 years ago, with his eighth and final title being in 1975. Since then, no rider has managed to win more MotoGP titles. Even across all categories of the Moto world, Agostini holds the record number of wins, with 15 overall wins. After an impressive career, Agostini hung up his boots and retired from the racing world at the age of 35. After which, he took some time out and returned as a coach for Yamaha. Will there ever be a racer that can steal the mantle and knock Agostini off the top spot? We’re not sure.

Valentino Rossi is one of the most well-known names in MotoGP. Even if you don’t follow the sport, you’ve likely heard his name. During the 00s, Rossi was making serious waves in the Moto world and taking to the top of the podium countless times. However, since then, his form has slipped, and he has struggled to keep within the top ten. That being said, he holds seven MotoGP titles, is only a pinch away from stealing the top spot and is the only rider to win titles across all Moto categories. Unfortunately, he will never break the record because the 2021 season was his last – this Italian legend has retired.

If you want to follow this superstar’s final chapter as a MotoGP rider, you can do just that by checking out this list of sites on OnlineCasinos.co.uk. You will find fully vetted and reviewed sites where you can follow the latest fixtures in all things eSports.

Marc Marquez has racked up some serious wins and is on track to go down in history as one of the greatest riders ever. He holds six MotoGP titles, which puts him one step behind Rossi and only three titles away from stealing the record-breaking spot from Agostini. Unfortunately, his winning streak was cut short after an accident back in 2020. Fortunately, after a long road to recovery, this Repsol Honda speed freak is set to return to MotoGP in an attempt to steal that title spot.

Mick Doohan had a rocky start to his MotoGP career after a series of injuries that could have seen him leaving the Moto scene, including permanent damage to his right leg. Luckily, the man was able to return in 1994 and steal five title wins in the space of four years. Although he didn’t speed to as many titles as the three riders above, this is an impressive feat given his circumstances.

Geoff Duke is considered one of the founders of Grand Prix Racing and was considered to be the greatest rider of the time. Without Duke, who set the bar high, the world of racing may not have been what it is today. As well as nabbing four titles as a rider, he tried his hand at F1 racing. In the post-war era, Duke was the first to become a motorbike superstar.

John Surtees is one of the most successful racing drivers in history. He was also one of the world’s most versatile drivers. He competed in the premier class of both Formula One and MotoGP, became world champion in 1964, and in 1965 he successfully defended his motorbike title. Throughout his exhilarating career, he managed to score four MotoGP titles in total.

Mike Hailwood was a British racing driver from England. He won four world titles in the MotoGP and one title in the 250cc class. He was also a two-time winner of the Isle of Man TT, a motorcycle race held on the Isle of Man. It’s his activities on the Isle of Man that Hailwood is most remembered for. Eventually, he turned his attention to car racing, otherwise, he could have been in the running for the top spot on this list.

Eddie Lawson is considered to be one of the best motorcycle racers of all time. This talented racer has won four world titles in the MotoGP category. The first title came in 1983, which made him the youngest-ever world champion at that time (he was only 24). Those titles were won with Honda motorcycles. Throughout his wonderful career, he rode with the likes of Mick Doohan and Kenny Roberts, which saw him spanning two generations of riders.

Wins in consecutive 250cc Championships saw Jorge Lorenzo take up the partnership seat at Yamaha alongside Valentino Rossi. In only his third season as a MotoGP rider, he secured his first win in 2010 after he won all but two races. In one of his most intense bouts, Lorenzo and Rossi battled it out for the title spot in 2015. Fortunately for Lorenzo, he managed to steal the show by a mere five points. In total, Lorenzo managed to win the MotoGP three times.

Incredible superbikes and phenomenal people make MotoGP one of the greatest racing events alongside Formula 1. Winning the MotoGP is a fantastic achievement and being on the higher end of the title count puts you on the map. The next season is gearing up to be exciting: will Marquez’s return allow him to knock Agostini off the map, and what’s next for Rossi? We are looking forward to finding out. 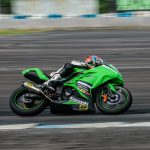 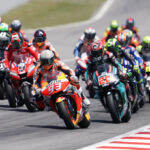