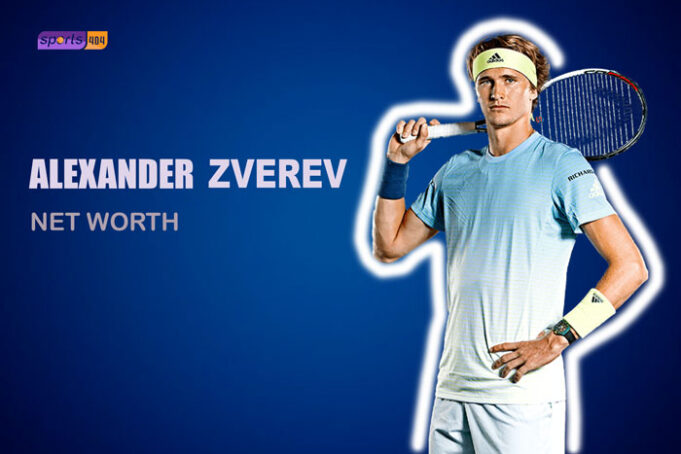 Alexander Zverev is a German professional tennis player who is currently ranked as 7th by the Association of Tennis Professionals (ATP). His best career ranking has been 3rd as rated by ATP.

He’s one of the only two active players outside the Big Four that have three ATP Masters 1000 titles. He reached his first Grand Slam final in the 2020 US Open where he lost to Dominic Thiem. The German won the 2018 ATP Finals, which also made him the youngest ever player for the title in a decade.

At 6 ft 6 in, Zverev is considered an unusually strong player who is a better returner than a server. An aggressive baseliner, Alexander often stands far from the baseline so he can hit powerful groundstrokes. His great height leads to his decreased agility on the court, but contributes to his increased reach and get more balls in the play.

Moreover, he has the ability to serve-and-volley as well. Mischa Zverev is considered as a strong proponent of that playing style.

As a tall player, he can generate faster serves at sharper angles. He is considered to be an all-court player who doesn’t have a preference for a particular surface. However, according to Rafael Nadal’s former coach, Toni Nadal, he exhibits a certain strength while performing on hard courts.

Alexander against the ‘Big Four’

Alexander has been earned praise from several high-profile tennis players including the Big Four who see him as a natural successor. Rafael Nadal has dubbed as the ‘possible future #1’, while Novak Djokovic has stated that he is hopeful of seeing the German beat his records.

The young German considers Roger Federer as his idol, citing him as an inspiration, and the only player that has left him star-struck after his interaction. Zverev defeated Roger Federer at the 2017 Canadian Open to win the title.

What is Alexander Zverev’s net worth?

A considerable young talent with a lot of potential for the future, Zverev has several endorsement deals. Head sponsors the rackets for the German athlete, while Adidas provides his other sporting gear.

He, along with Rafael Nadal, is also the brand ambassador for Swiss luxury watchmaker, Richard Mille. He’s also the face for Peugeot, a French automotive manufacturer. Moreover, he also represents the Italian fashion brand, Z Zegna, and is an ambassador for the brand.

Alexander was born to Irina and Alexander Sr., both of them being tennis players for the Soviet Union. His older brother Mischa also played professional tennis, having reached as high as 25 in world rankings.

His parents also served as his coach during his early years. Later on, Zverev hired the services of several high-profile coaches including, Juan Carlos Ferrero, Ivan Lendl, and finally settling with David Ferrer.

The German player has a massive 1.1 million followers on Instagram. Moreover, he has 273k followers on Facebook and nearly 85k on Twitter as well. However, he has faced some backlash on social media following allegations by a former girlfriend, Olga Sharypova. She accused the star of domestic and emotional abuse, which is vehemently denied by the tennis player.

Alexander is also reportedly expecting a baby with his ex-girlfriend, Brenda Patea. However, due to irreconcilable differences, she is not willing to share the custody of the soon-to-be-born baby.

The 23-year-old has cited social media to be a bit of a distraction when it comes to competing in major tournaments. He believes that while social media could act as a supporting fan base, it can also become a pressure point with expectations and results.

He currently lives in Monte Carlo, Monaco and is fluent in speaking Russian, German and English. Apart from tennis, he’s a fan of the Miami Heat in the NBA, and supports Bayern Munich in the German Bundesliga.