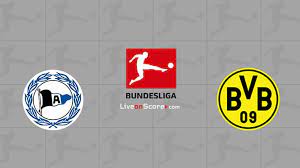 In the ninth match week of the 21/22 Bundesliga season, Arminia Bielefeld hosts Borussia Dortmund. The past five meetings have not ended well for Arminia when up against Dortmund. Borussia Dortmund is unbeaten in their last five matches against Bielefeld winning thrice, drawing twice. Arminia is winless in their previous five matches against Dortmund, losing three and drawing two.

Arminia may have survived last season by staying up in the Bundesliga. But their current chances of survival look slim, as they are seventeenth in the league at the time of writing. They have earned five points from eight, but they have not won a single game from their eight attempts. Despite the underdog status, they need a miracle to stay up given the current state of things.

With their latest win, Dortmund has gone up to second, a point behind Bayern. They may have lost two games already, but they are quietly creeping in behind Bayern. Dortmund has the second-best attack in the league as they look to make it their seventh win of the season against Arminia. Marco Rose seems to be fitting in quite well with the black and yellows.

How can I Live Stream Arminia vs Dortmund for free?