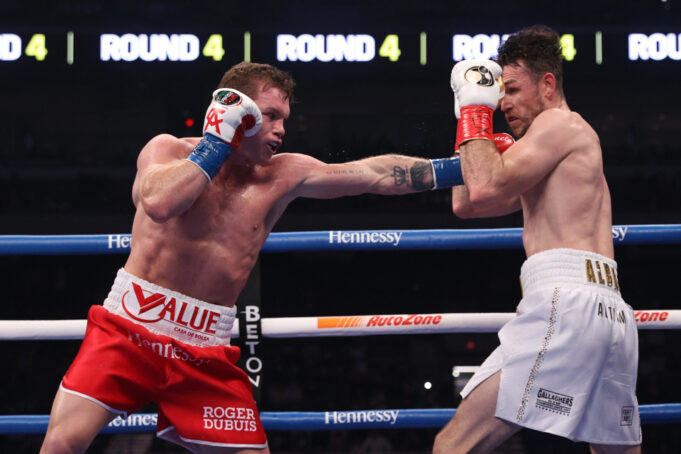 Canelo Alvarez won the WBO light-middleweight title after defeating a 27-year-old unbeaten boxer from Great Britain in 2016. Four years later, he’s facing that boxer’s younger brother, Callum, for his titles and undefeated record. Will Canelo register another win against the Smiths, or, will the latter finally prevail against their Mexican archrival?

The Main Fight: Canelo vs Callum

Saul “Canelo” Alvarez is easily the most popular name in the world of boxing right now. Not only has the athlete commanded a massive audience in terms of followers, but he also has a decent number of titles to his name. The Mexican boxer is set to face Callum Smith at the Alamodome in Texas, U.S.

Since the world got affected by the Covid-19 pandemic, the boxing fights have not been the same. With the absence of the fans along the ringside and the lack of boxing fixtures in general due to the virus spreading at such an unprecedented rate, a lot has changed.

This will be the first time since November last year that either Alvarez or Smith has fought in the ring.

Considering the history between Alvarez and the Smiths, this is set to be an interesting game. Canelo Alvarez has defeated Callum Smith’s elder brother, Liam Smith in September 2016. The Mexican won the WBO light-middleweight title as a result of that win. His win came after his victory against another Brit boxer, Amir Khan, who he defeated via KO.

Alvarez is considered the favorite for this fight. On the other hand, Callum has an undefeated pro record. However, that being said, Canelo won against Callum’s elder brother in pretty much similar circumstances.

The bout will be played for the WBA (Super) and The Ring super middleweight titles, which are currently held by Callum Smith.

When is Canelo Alvarez vs Callum Smith?

The boxing bout between the Mexican and the Brit is set to take place on 19th December 2020. This is the first time Canelo will be fighting since November 2019. The same can be said for Callum Smith, as the Brit himself has yet to fight in 2020.

Both of these boxers are highly rated and this can be dubbed as one of the biggest fights in the sport this year.

The exact time of the fight is expected to be announced closer to the event.

Where is Canelo vs Callum taking place?

The highly sought-after bout is set to be organized at the Alamodome in San Antonio, Texas, USA. This will be Canelo’s 23rd fight in the United States, and the second one at the Alamodome.

As for Callum, he has only fought in the U.S. twice, once in New York City and the other time in California. This will be his first professional boxing fight in Texas, USA.

Smith has only fought in the US two times before, which includes wins against Abraham Hernandez and Hassan N’Dam N’Jikam. On the other hand, Saul has only competed in Mexico or the USA in his professional boxer career.

It is expected that only a limited number of fans will attend the event. Due to the Covid-19, every major sport around the world has been massively affected, especially in terms of fan attendance.

How to watch Canelo vs Callum?

You can watch the highly anticipated fixture between Canelo Alvarez and Callum Smith through various online streaming services.

For Mexico, TV Azteca will air the match. This would be exclusive for the Mexican boxing fans who can watch the bout on their TV sets or stream it live online.

For the United States and the rest of the world, DAZN will live stream the fight. The US-based streaming service will be broadcasting it live on its portal. This service is not only available in the host country but also in more than 200 countries around the world.

Saul Alvarez is arguably the best professional boxer in the world right now. With 53 wins to his name, the world’s best pound-for-pound boxer is a worthy opponent in the ring.

Canelo’s only career loss came against Floyd “Money” Mayweather. The fight took place at the MGM Grand Garden Arena, where Floyd defeated the Mexican in front of a 16,000 crowd. Since then Alvarez has remained pretty much undefeated.

His impressive stats however were put on the test against the Mexican-American boxer. Anthony lost his titles, and the bout, to Andy Ruiz Jr. during their first fight. This was a major upset as the Brit was tipped to win the game easily.

His victory against Liam came after a successful fight against Amir Khan. Both Brit boxers lost to him after being knocked out. Canelo has a 100% percent win record and an 80% win-by-KO ratio against British boxers. Matthew Hayden is the only boxer from the British Isles that has not lost to him due to KO.

Alvarez is looking forward to this fight, and holds Callum in high regard as he is quoted from a press release:

“I’m very happy to return to the ring and continue to make history. I am motivated to continue to be the best, and I look forward to fighting Callum Smith, who is one of the best at 168lbs”.

Joshua is looking forward to his fight against Pulev, one that he feels confident about winning. He’s anxious to face fellow Brit boxer, Tyson Fury, in 2021. A lot of fans are eager to see the encounter between the two highly-rated boxers, making it one of the most sought after fights expected next year.

Smith is an undefeated professional boxer from Britain. He’s also dubbed as the best boxer in his division. The orthodox boxer has won all 27 of his fights, winning 19 of them by KO.

This would not be the first time that Callum is defending his WBA (Super) and The Ring middleweight titles. He has successfully done that in the past against John Ryder and Hassan N’Dam N’Jikam.

Moreover, this fight will also mark the second time that Callum is facing a Mexican boxer. He won his first encounter in 2014 against Abraham Hernandez.

Smith is looking forward to the fight in the year of the pandemic, and hopes this will be a silver lining for the boxing fans around the world:

“I’ve been wanting a big fight since becoming world champion, so I’m so pleased that during these challenging times we can deliver to the fans a fight between the very best in the division”.

This is one of the most highly anticipated fights in 2020. Due to very limited fans seating available at the venue, it will be very difficult to secure Canelo vs Smith tickets at the Alamodome in San Antonio. However, one can ensure that they don’t miss the match thanks to various live streaming websites available online.

In order to ensure that you get a high-quality live stream for Canelo Alvarez vs Callum Smith, make sure you get your subscription today and enjoy online live streaming of the boxing bout.

There are also free live streaming services available that feature prime time sports events. To know more about them check out our website.