Chelsea player salary in 2020? How much does Premier League side Chelsea spends on its players on wages? Who is the highest-paid player on The Blues’ roster? Chelsea in the 2020-21 Premier League competition.

Chelsea is one of the highest paying football clubs in the world. The club pays a lucrative sum of money to its players to keep them performing at the top level. But, do you know how much is each Chelsea player salary in the current season? Premier League is undoubtedly the biggest football league in the world.

This league has all it takes to attract world-class players from around. And when you tend to have such players in your roster, you got to spend a lot on them, right? Who could be taking the biggest sum every year from the club?

Who is the Highest-Paid Chelsea Player in 2020?

Chelsea is one of the top teams in the world and obviously in the top English tier. The club can offer a plethora of talents to play for the side. Chelsea has spent some big money to trade players in the past few years. And when you have the likes of Kepa Arrizabalaga, N’Golo Kante, and Olivier Groud, you got to spend a big money on your players. 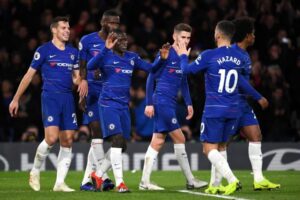 The top earner in the Chelsea roster is Timo Werner. Timo earns £14 million per season with Chelsea. The club’s second highest-earner is Kai Havertz. Havertz earns £13.5 million per season with Chelsea. This German footballer who joined The Blues on a five-year contract on September 4, 2020. Chelsea got hold of Havertz for a reported initial fee of £62 million. Christian Pulisic earns £10.5 million. His weekly wage is £220 thousand.

Chelsea has a Total Player Wages Bill of £190 million

Chelsea is one of the top teams in the English top tier, and the obviously goes without saying. The club not only has some of the finest talents in world football but also the club has a huge wage bill to keep the A-listers on its roster. Over the years, the wage bill of Chelsea has increased drastically. By the end of the 2020-21 EPL season, Chelsea will spend a huge sum of £190 million on player wages.

The £190 million player wages bill does not include players’ bonuses. The amount increases to £230 million including signing fees and player bonuses. After finishing the 2019-20 EPL season on a bad note, Chelsea made some big signings for the current EPL season. Chelsea signed Kai Havertz on a record transfer fee of £72 million.

List of Chelsea Player Salary for the 2020-21 EPL Season

Below is the complete list of Chelsea player salaries for the 2020-21 Premier League season.