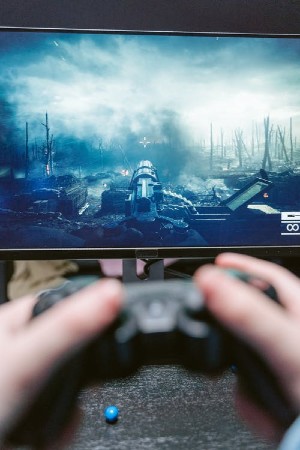 Professional footballers have dedicated their lives to building successful careers, and they have very strict schedules and regimes which doesn’t leave them with much spare time.

It’s no surprise that footballers resort to playing video games, so they can blow off some steam and take their minds off football for a while.

Some of the most notable football stars of today are avid gamers, and they use video games not only for entertainment but to build focus, decision-making skills, and reflexes. Moreover, playing online games can increase teamwork ability, and all of these skills can certainly come in handy while playing football. Having said that, here are the five football players who love video & online games.

This PSG superstar is one of the biggest fans of video games of all footballers. Neymar Jr. enjoys playing on a console, PC, and smartphone, and he often streams on Twitch so he can show off his gaming abilities. Although he mostly plays online games like Fortnite, Call of Duty, Counter-Strike: Global Offensive, he also enjoys playing online casino games since he’s very passionate about poker.

It looks he’s skilled at online poker, especially since he participated in the European Poker Tour back in 2015. And considering that he’s one of the most paid footballers ever, he’s able to play high-stakes poker games online.

If you are interested in playing online casino games, you can start playing right away. Find the latest casino bonuses at Casino Bros, a specialized website with reviews and ratings of renowned online casinos, where you can choose an online casino that works for you.

While many other players use video games to escape from reality, Griezmann uses them to sharpen his focus, and he learned this tactic from a legendary Andrea Pirlo who used to play games before big matches during his career.

This former Arsenal and currently Real Betis player mostly take joy in playing FIFA, but one game has a special place in his heart. That game is Call of Duty, and he likes playing it so much that he has a tattoo of his clan tag from this game.

This tattoo has a huge meaning for him since it reminds him of his friendship with his youth teammates with whom he played Call of Duty. This is proof that video games can connect people.

Unlike those gamers who are playing on consoles or PCs, Dybala is able to play his favorite game during his flights and such, which allowed him to master the PUBG and get an outstanding K/D ratio. He even competed in PUBG Global event and ended up in fifth place.

Famous for his speed on the pitch, it’s no surprise that his preferred game is Forza Motosport — a racing game. Gareth Bale owns several sports cars, and playing for Real Madrid has allowed him to obtain them. But before doing so, he enjoys trying out those cars in Forza Motorsport on his console, which is where he gets inspiration for new purchases.

Moreover, some of the footballers are considering launching their e-sports career after ending their football career, because this can allow them to compete and use their teamwork abilities, even if it’s off the pitch. On top of that, e-sports players make big money, and football superstars are already used to that.