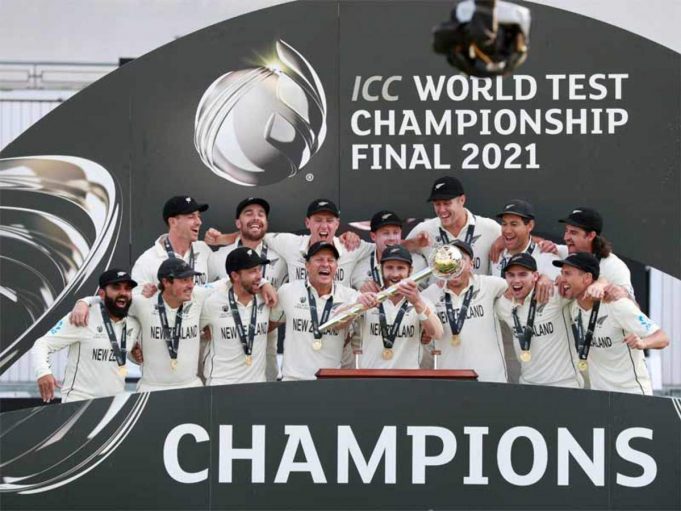 ICC has introduced a brand new concept called ICC World Test Championship in 2019.  They have introduced this concept to give a context to Test cricket. In recent years, the popularity of test cricket was in danger. Its audience was in a decline. To bring back the audience to Test Cricket, it was necessary to give it context.

The inaugural season of WTC was for a two-year period between 2019-2021. In the format played for the opening season, there are many things. First, every team plays against six teams during this cycle. Nine teams participated in the first championship. New Zealand Emerged as its winner. Today we will discuss the changes that can be done in rules for WTC 2021-2023.

The rules and regulations for WTC are as follows. The first and foremost rule of this championship is a cycle of two years. Every team plays six teams during this period. Every team plays at home against three teams. Also, they play against the other three in an away series. This means that there are three home series for each team. Also, they have the same number of away series.

Another rule is about the points. Every series will have a total of 120 points. The length of the series can vary in terms of matches. Conditions due to pandemics changed the rule midway. Pandemic made cancellation of several bilateral series mandatory. The percentage system was the new qualification criteria. Win percentage became an important factor. On the back of this win percentage, India and New Zealand reached the final of the championship.

The final of the WTC is a one-off test. The top two teams in the points table are supposed to play the final. Initially, it was at Lords. The conditions changed in recent months due to the crisis. A reserve day was there for the final of the first season.

Southhampton hosted the final of the championship. The threat of rain was always looming over the fixture. The shower from the sky resulted in the use of reserve day for the final match. The sixth day came into play. The match was heading towards a draw. But, the Indian batting line-up struggled on the last day.

In the third innings, the disappointing show by batsmen resulted in an easy target for opponents. Kiwis made no mistake getting advantage of the situation. Williamson and Taylor made a solid partnership. They carved a winning path together for Kiwis. The final was a good contest.

New Zealand lifted the silverware. It was very nice to see such a nice guy like Williamson lift the trophy. ICC trophies were evading him for the last few years.

The second cycle of the World Test Championship can also be termed as WTC 2. This cycle will start with India vs England starting from August. Like the previous format, each team will play six series. Three home and Three away. There is a huge difference in the number of games each side plays. Also, WTC 2 have only two five test match series in it. India and England will play five-match series and the other one will be Ashes.

England plays 21 matches while Bangladesh will play only 12 matches. Also, the points system is the same as the previous one. In the next section, I have given the teamwise distribution of the series. Later on, we will turn on to what changes can be done to this format for a balance. 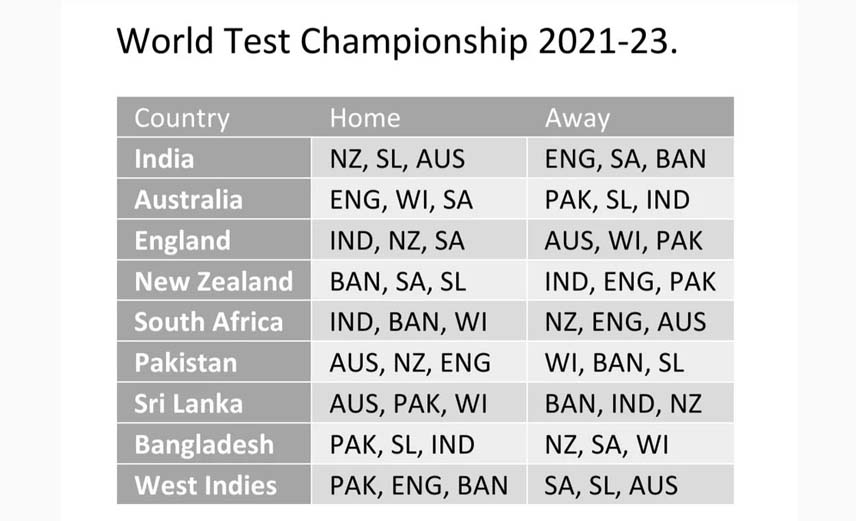 let us now take a look at the changes that can be done by ICC in the format.

Change 1: Every team plays against each other

When we speak about the championship, it is a multination tournament. In such a scenario every team should play against every team. In the current format, every team plays against six teams and misses out on two teams. Also, there are no criteria to decide these opponents. There is no specific reason and criteria as to why a team does not play series against two teams in this championship.

What I suggest is either each team should play against everyone or else make the groups.  ICC should schedule the order to ensure this. Otherwise, if it gets difficult to do this due to the other scheduled matches make groups. Just like a world cup, these nine teams can be divided into two groups. Teams in the same group then should play against each other.

The problem with this can only occur in the case of Pakistan. As India does not play with Pakistan, this can be hard to implement. But, India plays against them in ICC tournaments. So, like that, they can play with them in a neutral venue.

This move could be very beneficial for the promotion of the sport. With the addition of more teams, ICC can serve two purposes. One, they can add associate teams into the mix. Second, it will be easy to divide teams into groups then. Currently, world cricket has only four strong teams in all formats. Adding more teams will develop more teams and they can grow with their quality in the coming years. Teams like Netherlands, Ireland, or Afghanistan will learn from these experiences.

If the championship is played with 12 participants, it can be divided into two groups. Each group will have six teams.  More teams will increase the competitive factor. Small and weaker teams will give their best against top-quality sides. Also, a system like the Ranji trophy can be implemented. Just like Ranji Trophy have different groups like plate and elite. It will provide more cricket in between top countries as they will be grouped together. Also, minnows will go all guns blazing against top teams as they will have fewer matches against top teams.

This does not sound fair. Every team should be given equal chance. Also, it will a proper world cup like competition.

In the current system, every series have a different number of matches. The Ashes will see 5 matches. In contrast, some series will have only two or three matches. Playing three-match series for the world test championship seems to be the appropriate solution. It will give equal chance to everyone. Also, every result or draw will weigh the same in terms of points.

In the ongoing system, points for a victory change according to the number of matches played in that particular series. A three-match series will give an equal distribution of points to every match.  It will be good to see every match with the same significance.

Change 5: Extra points for an away win

Playing in foreign conditions is always difficult. The conditions are always challenging for a visiting player. He faces very unusual situations which he does not face on home pitches. For example, English players play well in pace-friendly conditions. Their game is designed like that because of the home conditions. But, the same batsmen struggle against quality spin. 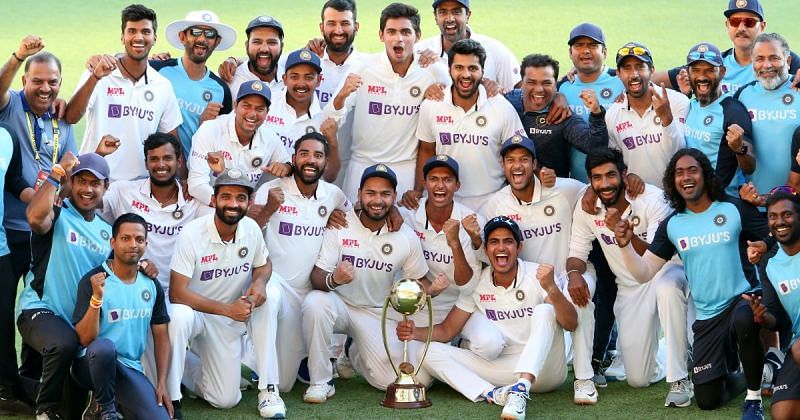 Whenever England has toured India, most of the time they have struggled. 2012 series was an exception to that. Also, in the first cycle, India beating Bangladesh at home should have given fewer points than India beating Australia in Australia. This time ICC can correct it. They can give some bonus points for winning in away conditions

ICC World Test Championship points table decides the participants in the final. But, in every competition, the most consistent team must be rewarded. Just like IPL, ICC can honor the consistency and performance of the top team. The whole cycle is of two years. It is not an easy task to play in a tournament so long with limitless consistency. The team who will show class and performance will finish at the top of the table. Such performance deserves a prize and there is no doubt about that.

In the final of the opening two-year cycle, an extra day was reserved. In the preliminary matches also same can be done. Depending on the weather forecast, ICC should be flexible with the extra day. Matches in English conditions are always under the threat of rain. So, they can have one extra day in case the rain falls.

The draw has points and value to it. But, result-oriented cricket will bring more spectators to the game. It will be very good for the sport. Test cricket can enjoy its old prestige with the intent to get the result. Also, depending on the weather forecast prior to the match same can be done. If there is the danger of rain over a match, ICC can plan a reserved day in advance.

A neutral venue hosted the final of the ICC World Test Championship 2019-21. Technically it was a neutral ground but was suitable for New Zealand. Playing conditions in England and New Zealand are almost the same. In the final, it was like a home ground for Kiwis. A more neutral ground would have been in South Africa or Australia.

The final of the first championship was a one-off Test match.  There was a debate going on social media regarding the format. Is it correct to decide the winner of the Test World Cup with just one match?. Many cricket fans and experts posed this serious question. I think there should be a three-match series between the finalists. Sometimes, teams take time to get into the grove. Once they adjust to the conditions it will be a brilliant contest.

Change 10: The Format for the final

I also have an idea to decide the winner of the teams. This might sound like a very bizarre idea and hard to implement. Three different venues might host the matches of the finale series. One match each will be played on the home ground of both the teams. The final test of the series will be on a neutral venue. This format will take too much time due to traveling. But they can keep a window of 45 days where no cricket will be played except the ICC World Test Championship final.

In spite of the difficulties if this idea gets implemented it will be very interesting to see. It will be a fair contest and the final match will be a blockbuster. Also, these three matches can be played in between the series of the next cycle.