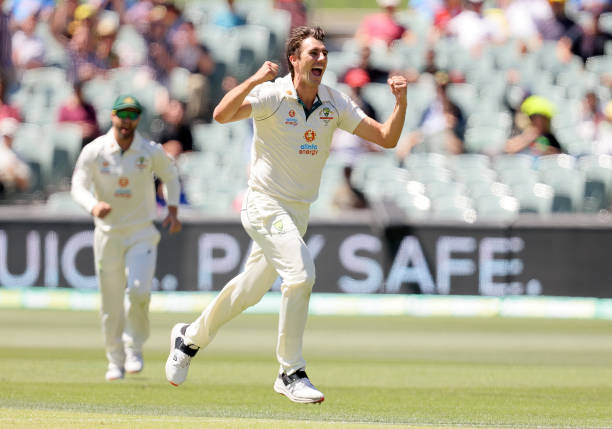 ADELAIDE, AUSTRALIA - DECEMBER 19: Pat Cummins of Australia celebrates after taking the wicket of Virat Kohli of India during day three of the First Test match between Australia and India at Adelaide Oval on December 19, 2020 in Adelaide, Australia. (Photo by Daniel Kalisz/Getty Images)

Every year many bowlers emerge, showcase their talents and climb their way up a fan’s favorite list. Therefore to recognize and applaud them for their aptitude, ICC has always had a top ranking list that is updated every year, giving bowlers the chance to be appreciated for their hard work.

Thus encouraging them to give their best and improve themselves. The Test Match format was the first-ever structure given to cricket. Cricket was still in its developing stage, however, even then many talented bowlers surfaced. Some even now known as the best of all-time bowlers. So today, we at Sports404 will update you on the latest ICC’s Rankings for Test Bowlers.

More often than not is Josh Hazlewood compared to legendary Glenn McGrath and this comparison is not baseless at all. Hazlewood has proved his credibility and talent time and time again. His bowling style is right-arm fast-medium. However, his bowling style is most definitely perfect for the Test format, as he seems to fall short in the shorter formats. His current rating stands at 816 with his best being 863 against India (07/03/17).

Born in Burnley, Lancashire, James Anderson is one of the best swing bowlers in the world at the present moment. He made his England debut in the season of 2002 and for the best part of five years till late 2007 remained in and out of the side. In the early times of his debut, he was considered ‘too soft’ and thus incapable of being a world-class player. However, he has proved all critics wrong and now stands at number 4 in the top ranking list. His total current rating is 822 and his best was 903 against India (13/08/18).

Neil Wagner is another strong pillar that the New Zealand cricket team can lean on. He has produced decent and consistent results. He is a left-arm fast-medium bowler. However, he isn’t able to produce the wonders he does in Test matches, in the shorter formats. His current rating stands at 825 with his best being 859 against Australia (30/12/20).

Ravichandran Ashwin burst into the cricketing season in the shorter formats, showing his potential in the IPL. Incidentally, after his Test debut, he has shown incredible stamina in this specific format. Ashwin has certainly has worked hard and turned himself into a formidable bowler.  He has a right-arm off-break bowling style. His current total rating stands at 850 with his best being 904 against England (12/12/16).

Pat Cummins deserves this spot, no doubt about it! He has shown stability and consistency in the most difficult of matches. Unfortunately, even with such exceptional talent, he wasn’t able to capitalize on it too well, since his body would sustain a great many injuries. Not until recently has he been able to fully give his best and truly it has paid off as he stands at number one in the Player Rankings. He is a right-arm fast bowler. Cummins’s total rating is a whopping 908 with his best being 914 against England (18/08/19).

So this is it guys, ICC’s Rankings for Test Bowlers. We hope that this article proved useful to you and you found your favorite player on here. Stay tuned to Sports404 for more information on your preferred sports.