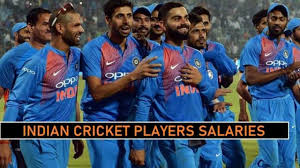 With cricket becoming ever more recognized in the world and gaining more fans, it is no wonder that cricket lovers have begun to wonder what their favorite cricketers earn. The Indian Cricket team, being one of the world’s top cricket teams, has undoubtedly very talented and hardworking cricketers and now that BCCI has proclaimed the salaries for their athletes, fans have to search no further.

According to the BCCI, the salaries are divided into four categories, namely: A+, A, B, and C. Each individual player is categorized into these four grades. Depending on a player’s performance in the last cricketing season, he/she can be upgraded or degraded from his/her initial grade. Expectedly the list of players in a grade is controlled by the BCCI.

The Fixed Salary for Each Grade (men cricket team) is:

The Fixed Salary for Each Grade (women cricket team) is:

If for whatever reason, a player is not listed down in the contracted players and still plays a minimum of three matches, any format (Test/ODI/T20), he/she will be promoted to a superior grade.

Incidentally, BCCI has announced that Indian spinners Yuzvendra Chahal and Kuldeep Yadav have both been downgraded to Grade C from Grade B and Grade A respectively. This stands to show that grading can be changed depending on a player’s performance and is subject to drastic change. Similarly, players like Axar Patel, Mohammed Siraj, and Shubman Gill have attained Central Contract with the BCCI based on their performances in the last cricketing season.

What are the factors taken into account when Calculating a Player’s Salary?

Match Fee: Every individual player who participates in an international match is awarded a match fee. The Match fee remains the same for the entire squad, regardless of a player’s grade.

Team Performance Bonuses: Rewards are designated for individual players on a stellar performance against the top three ranking teams in the world at the time. These bonuses are awarded by the BCCI. For example: if they score a fifty or a century or are able to bag numerous wickets. This increases their salary by 30-60%.

Retainer Fee: A retainer fee is a guaranteed yearly salary that is paid to all players, in the central contract with BCCI, based on where they rank in the grading system (A+, A, B, and C).

At the moment, Virat Kohli is the highest-paid Indian Cricketer, basing on his contract with BCCI, partnerships with various brands, and endorsement deals.

All in all, numerous factors are in play when adding up a player’s salary.