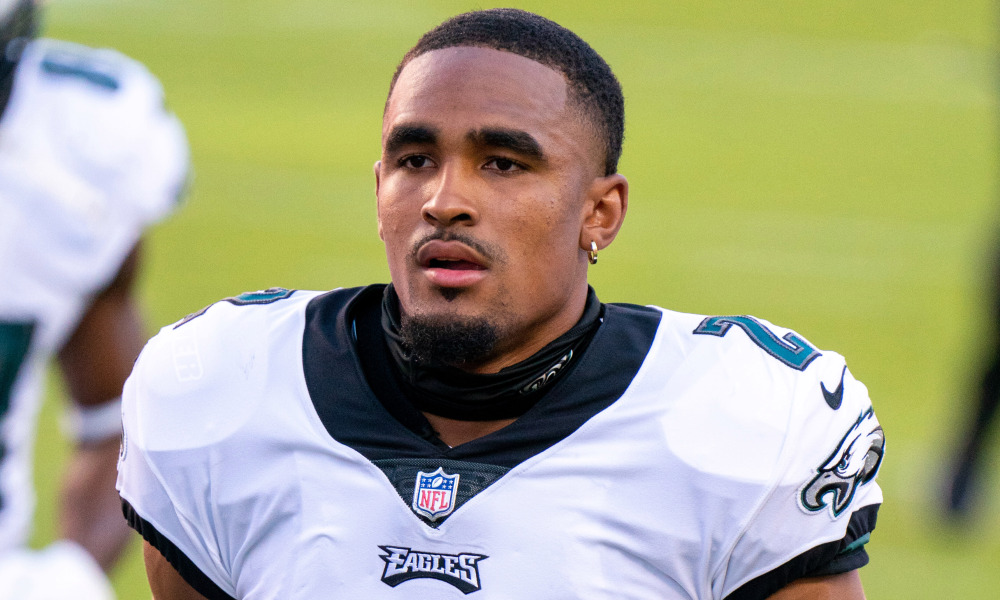 Jalen Hurts’ full name is Jalen Tyrone Hurts. He is a 22-year-old American football quarterback. Moreover, he plays for the team of Philadelphia Eagles in the NFL (National Football League). Jalen Hurts’ net worth in 2021 is $1 million. This young talented athlete as a footballer started playing the game in his college years as well. He attended his college in Alabama and Oklahoma where he played from 2016 to 2019.

Jalen Hurts has made a name for himself very early in his young National Football League career. He really stepped up during the entire duration of Carson Wentz’s disappointing run in the 2020 season. Hurts was probably already a bigger threat than every quarterback in the NFL except Ravens QB Lamar Jackson. Hurts ran 63 times for 354 yards, three TDs, and 25 first downs, which is quite a good performance in a short space of time. He plays in the position of being a Quarterback(QB).

Jalen was rated as a four-star recruit and was ranked among the top dual-threat quarterbacks in the Class of 2016. He ended up committing to the University of Alabama in 2015.

Hurts started his freshman season as a starting quarterback and really had a 2016 season to remember with historic performances to the delight of his coach Nick Saban. He threw for nearly 2,780 yards and 23 touchdowns with 9 interceptions. Jalen threw for 2,780 yards and 23 touchdowns with nine interceptions and Alabama ended its 2016–2017 regular season campaign with a perfect 12–0 record. Hurts led his team to victory in the 2016 SEC Championship game over the Florida Gators. Unfortunately for him, his season did not get the silver lining he worked hard for as Alabama faltered in the 2017 College Football Playoff National Championship against the Clemson Tigers by a score of 35–31.

Hurts and the Tide though got its revenge a year later in the 2018 Sugar Bowl by defeating the Clemson Tigers comprehensively with a score of 24-6. Jalen Hurts also went on to win his first National Championship as the Crimson Tide defeated the Georgia Bulldogs by a score of 26–23 after overtime. Overall, he finished the 2017 season with 2,081 passing yards, 17 passing touchdowns, and one interception with 855 rushing yards and eight rushing touchdowns.

At the start of his sophomore season, QB Tua Tagovailoa was officially named the starting QB going into the new season while Hurts was given a backup QB role in the 2018 campaign. Despite the limited game time, he relieved an injured Tagovailoa in the 2018 SEC Championship Game and led his team to a comeback victory against the Georgia Bulldogs.

In his senior season, Jalen used a graduate transfer to Oklahoma to play regular football in his senior season. Hurts did start really brightly for the Sooners by helping them to a Big 12 Championship and earned a spot in the College Football Playoff. Though the  Sooners’ season abruptly ended with a 63–28 loss to LSU in the 2019 Peach Bowl. Hurts with the Oklahoma Sooners, threw for 3,851 passing yards, 32 passing touchdowns, and eight interceptions with 1,298 rushing yards and 20 rushing touchdowns. He ended up finishing second in the Heisman Trophy voting to Joe Burrow.

Jalen Hurts was selected by Philadelphia Eagles with their 53rd pick in the second round of the 2020 NFL Draft. He played as the starting QB for Alabama from 2016 to 2019.

Hurts’ net worth in 2021 has been estimated to be around $1 million. The major sources of his wealth status are his NFL contracts, salary, and endorsements.

In comparison to NFL QB numbers, the contract is extremely cheap, which is why rookie contracts for breakout stars like Patrick Mahomes are so valuable while they last. The expectations from Hurts to lead the Eagles in the 2021 season remains a question to be answered, but the general perception of fans is that he’s a polished leader and a mature and grounded athlete. He comes across as someone who is willing to put in the hard work it takes to thrive as a pro QB in the NFL.

Hurts has starred in a Gillette commercial in his young NFL career with no major endorsement deals signed yet. Slowly but surely Jalen is becoming an attractive commodity to such big brands if his performances continue to be consistent.

Despite what many are led to believe, Jalen Hurts’ career has been award-laden since his college days, including individual honors. Below is the list of some of the remarkable achievements that Hurts have achieved throughout his career: