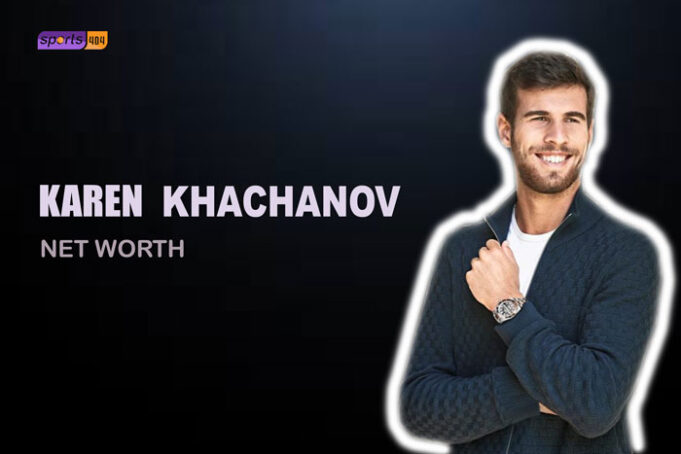 Karen Khachanov is a Russian professional tennis player who is currently ranked 20th on the Association of Tennis Professionals (ATP) list. He achieved a career-high singles ranking of 8 by ATP after he reached the quarter-finals of the French Open.

In 2013, Karen won the Under-18 European Championship, making him eligible to appear in the pro series. This made him the youngest tennis Russian player, breaking the record previously held by Mikhail Youzhny.

He won his first ATP title after winning the 2016 Chengdu Open. He has since then played in major ATP tournaments as well, performing the best in the French Open with a 76% win rate.

However, Karen’s highlight came in the 2018 Rolex Paris Masters when he defeated Novak Djokovic in straight sets, winning his first-ever Masters 1000 title.

It was a massive win for the Russian to announce himself on the world stage. Djokovic was ranked #1 in the world at that time and defeating him in a final was a big deal.

Khachanov is an aggressive baseliner. He is capable of hard-hitting groundstrokes and serves. The young Russian either sets up winners using his serves or uses his forehands to dictatebb rallies.

He plays intelligently, either trying to hit outright winners or wear opponents down with consistent offense aiming at winning easy points.

However, his defensive game is comparatively weaker than his aggressive game. If put under pressure, Karen struggles in quickly meeting up with the rallies.

The pro tennis player has called Marat Safin and Juan Martin del Potro as his inspirations. He found his interest in a sport when he was in kindergarten, being only 3 years old at that time.

What is Karen Khachanov’s net worth?

Although there are no confirmed reports as to his current wealth, it is estimated that Karen Khachanov’s net worth is around $6 million.

The majority of his assets exist thanks to his professional tennis prize money. However, there also have been endorsements by the rising star with some of the biggest brands in the world.

Karen currently has endorsement deals with Nike, Mercedes, and Rolex.

The recent addition to his endorsement list came from Giorgio Armani in 2020, as the 23-year-old announced the partnership on his social media.

He married Veronica Shkliaeva after turning pro. He met her after his Davis Cup debut and married her in 2016. She is often seen traveling with him during his tours and the couple recently had a child together, named David.

He is a sister named, Margarita, and a brother named, Georgiy. As a child, he supported Real Madrid and the Miami Heat in football and basketball respectively.

Karen is of Armenian descent and has expressed his support for Armenia in their recent conflict against Azerbaijan on social media. The athlete called for peace among the region, especially the two nations over their territorial claims.