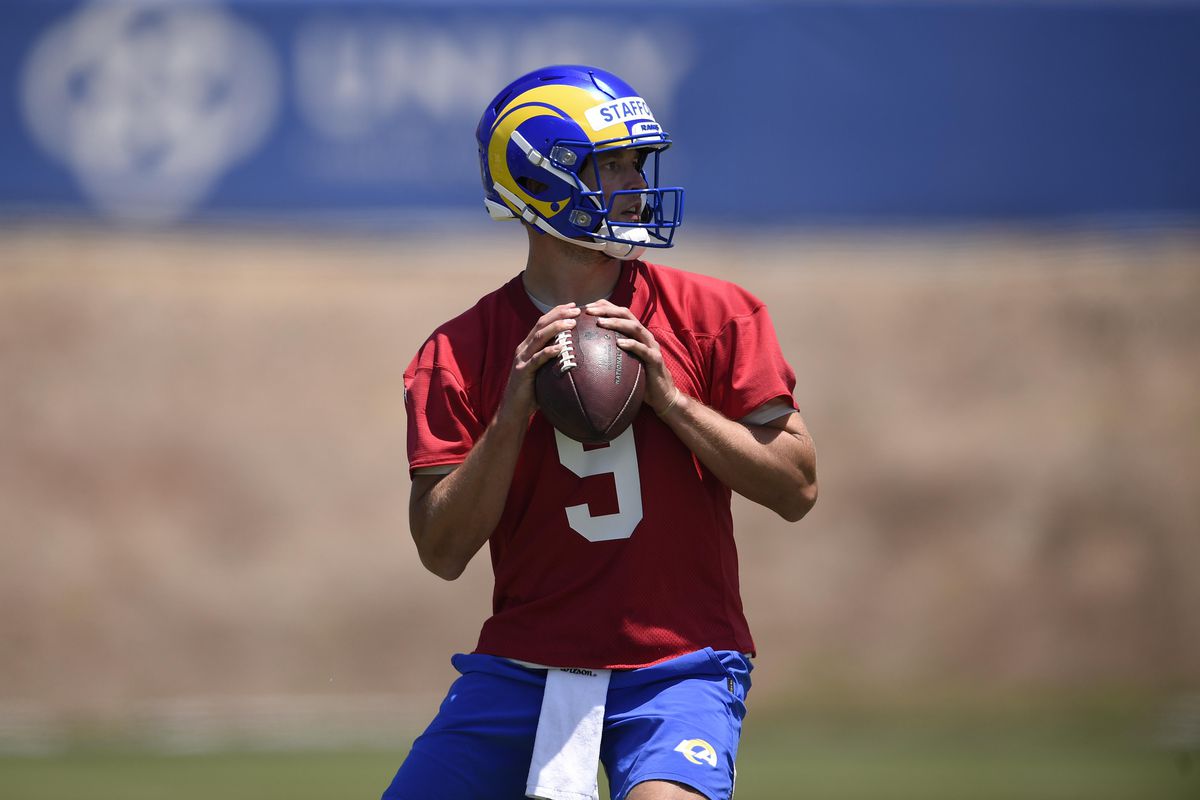 Matthew Stafford’s full name is John Matthew Stafford. He is a 33-year-old American football quarterback. Moreover, he plays for the team of Los Angeles Rams in the NFL (National Football League). Matthew Stafford’s net worth in 2021 is $35 million. This experienced and talented athlete as a footballer started playing the game in his college years as well. He attended his college at the University of Georgia where he played as part of the Bulldogs from 2006 to 2008.

Matthew Stafford has been called an ’empty calorie’ and middle of the pack QB in the National Football League. He is a certified veteran QB who is considered by many NFL analysts, having completed almost 12 NFL seasons from 2009-2021. He plays in the position of being a Quarterback(QB).

Matthew didn’t really have a stable growth period early on as they moved from Georgia to Texas. He attended Highland Park High School in Dallas, Texas. He was coached by Randy Allen and was widely considered to be one of the best high school QBs in the US in 2006.

In 2005, he led his team to a perfect 15–0 record and won the UIL 4A Division I State Championship. Stafford had over 4,000 yards passing despite not playing in the first three games of the season due to a knee injury. He also won plenty of individual recognition after becoming the MVP and Best Arm awards at the 2005 EA Sports Elite 11 Quarterback Camp and also was the 2005 EA Sports National Player of the Year.

Stafford was given a high bar as a 5-star recruit status, after being on the list as the No. 1 pro-style quarterback prospect in the class of 2006. He dropped out of high school early on and enrolled at the University of Georgia in January 2006.

Matthew’s college career debuted late in the season opener of the 2006 season against Western Kentucky and he threw 3 of 5 passing for 40 yards and a touchdown pass in a 48–12 victory. He continued with the victorious run with Georgia stretching their record to 5-0 but then inconsistency plagued them for the rest of the season. Stafford completed his freshman season by leading Georgia to a 31–24 come-from-behind victory over Virginia Tech in the 2006 Peach Bowl. This victory allowed Georgia to finish the season with a 9–4 win-loss record. Stafford finished his freshman season with 1,749 passing yards, seven touchdowns, and 13 interceptions.

In his sophomore season, Stafford had a really important career contribution, when he threw 175 yards of passing and a touchdown pass during Georgia’s 41–10 rout of the #10 ranked Hawaii Warriors in the 2008 Sugar Bowl. He completed 194 of 348 passes for 2,523 yards and 19 touchdowns as well two rushing touchdowns for the season. Stafford’s performances helped Georgia reach an 11–2 record, their best mark since the 2002 campaign.

Both Matthew and his team also entered the 2008 campaign with the longest active winning streak among all teams, having won their last seven games. He helped lead them to victories in their first four games to move their undefeated streak to 11 but they suffered their first setback in a 41–30 loss to #8 ranked Alabama. Matthew Stafford finished the season with a conference-leading 235 pass completions for 3,459 passing yards, the second-most in school history, and 25 touchdowns, the single-season record for passing touchdowns.

Matthew Stafford was selected by the Detroit Lions with their No. 1 overall pick in the first round of the 2009 NFL Draft. He played as the starting QB for the Georgia Bulldogs football team from 2006 to 2008. He did not end up staying on for his senior season.

Matthew Stafford Net Worth in 2021

Stafford’s net worth in 2021 has seen estimations to be around $35 million. The major sources of his wealth status are his NFL contracts, salary, and endorsements.

There’s no guaranteed money left for his new team the Los Angeles Rams to get out of his contract at any time. They would have to take on a single penny in dead money unless they plan to cut or trade him. Stafford’s cap hit will be $20 million in 2021. It will be $23 million in 2022 before he enters free agency in 2023.

Despite the many stop-start moments, Matthew Stafford’s career has been record-making at some point or the other, even including some individual honors. Below is the list of some of the commendable achievements that Cousins have made throughout his career: