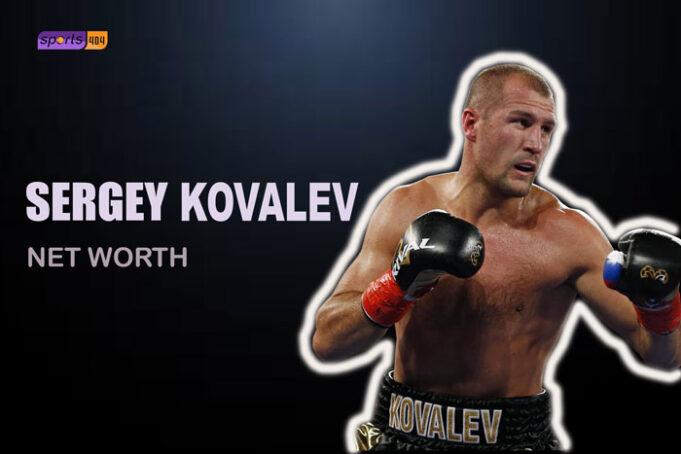 Sergey Alexandrovich Kovalev is a Russian professional boxer born on April 2, 1983. He is a lightweight boxer with an orthodox stance. The ringster has won several Russian and World Military Championships during his time as an amateur boxer.

Kovalev started off his professional career following a win against Daniel Chavez in 2009. He remained undefeated till his encounter with Andre Ward in 2016. Following his fight with the American, the 37-year-old had mixed success in his professional bouts.

Sergey, also known as ‘The Krusher’, can deliver exceptional power punches. The Ring ranks him as the second-best active lightweight professional boxer, while BoxRec ranks him third in the same category.

What is Sergey Kovalev’s Net Worth?

The former light heavyweight world champion has earned a decent living from his professional fighting. Kovalev’s net worth is estimated at $4 million according to Celebrity Net Worth.

In 2017 Sergey’s purse per fight is reportedly around $1.5 million. Since then he has fought Andre Ward, Vyacheslav Shabranskyy, Igor Mikhailkin, Eleider Alvarez, Anthony Yarde, and most recently, Canelo Alvarez.

The Krusher loves posting about his family on his social media and the fans just love it. Sergey has a presence on Instagram, Twitter, and Facebook.

In 2018, Kovalev was arrested for punching a woman in the face in California. However, after court proceedings, he pleaded guilty to misdemeanor charges and was sentenced to three years in probation.

A few weeks later the accuser withdrew her case and dismissed her lawsuit.

The Russian pro boxer is expected to make an appearance in the ring and fight light heavyweight contender, Sullivan Barrera in the near future.