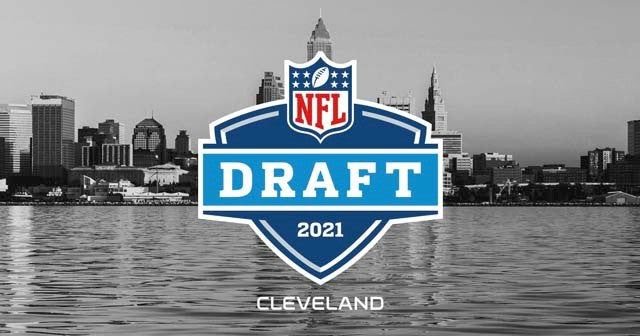 86th Annual Franchise Meeting would be held in the city of Cleveland, Ohio.

The extravagant event in the NFL calendar, the 2021 NFL Draft begins with the 1st Round on 29th April(Thursday) and runs until 1st May(Saturday). The host venue for the 86th annual draft meeting for all these franchises will be in downtown Cleveland, Ohio. Some of the featured locations would be FirstEnergy Stadium(the home of NFL Franchise Cleveland Browns), the Rock and Roll Hall of Fame, and the Great Lakes Science Centre.

The NFL Draft Night would be a signal of resolve towards back to being ‘business as usual’ status for the National Football League(NFL), as the event is gonna be happening this time out in person rather than remotely in 2020, as many fans have come to known in years prior.

The 2021 Draft has a lot of surprises in terms of the talented prospects who will discover their eventual NFL homes and might just hold the keys to the success of the Franchises aiming to strike gold in the very near future.

A very interesting development in the NFL’s annual showcase would be the significant number of draft prospects, who decided not to play in the 2020 college football season due to COVID-19 health scares. How NFL teams treat these players on draft night will be an interesting sign for future generations of draftees.

The 2021 NFL Draft will contain 259 picks in total across multiple rounds, with the first pick going to the team with the worst win-loss record in 2020 season, the Jacksonville Jaguars.

6. Miami Dolphins (from PHI via trades)

Who are the Top Prospects in the 2021 NFL Draft?

Arguably the best quarterback to emerge out of his generation, he has been touted as the ‘can’t-miss’ prospect since Andrew Luck in 2012 by many NFL analysts. One of the country’s top ranked QBs since high school, where he captured two state championships. By winning a national championship and a remarkable win-loss record of 86-4 with Clemson in high school and college, many have declared him as the complete package and Jaguars with the first pick will surely be looking to pick him to turn around their fortunes.

Wilson has to be one of the most dynamic quarterbacks to have ever come out of college. He has won the Player Year of The Award while playing at Brigham Young University after throwing 33 touchdowns in 2020. Drawing comparisons with NFL superstar, Patrick Mahomes, he has similar elusive ability to throw the ball on the run and off his back foot, something which will be attractive to franchises looking for players in this position.

The best dual-threat in the draft class of 2021, Fields does tick a lot of the boxes that franchises would sure have been looking for. Fields, was seen as one of the prospects who could have gone with the No.1 pick in 2021, if only both Lawrence and Wilson weren’t in this QB heavy class. After a transfer to Ohio State, he was among the finalists for the Heisman Trophy(Best College Player), for completing 41 passing touchdowns and 10 rushing touchdowns in 2019.

Jones, is as traditional a quarterback, NFL franchises could possibly look forward to pick up in the 2021 Draft. While playing his college football at Alabama, Mac Jones was the standard in terms of consistency and having a photographic memory would be a nightmare for any opposition. He led all the QBs in 2020 for pass completion and completing 4500 passing yards is no meaningless feat. It was him and his Alabama team which defeated Justin Fields and Ohio State in national championship game.

The first wide receiver to win the Heisman Trophy since 1991 is all one needs as a introduction. Jones’s partner-in-crime at Alabama, Smith played a crucial role in their national championship game and was also named the Offensive MVP. A silky smooth runner with freakish toughness to run through tackles. He is a high volume weapon in the right system as soon as he steps on a NFL pitch.

If franchises are looking out for prospects who can takeover games and are players with varying qualities, then Pitts is their man. He is what analysts like to call a ‘mismatch’, due to his height of 6’6″ and 250lbs. A player whose dominance can be attributed to the fact that he didn’t drop a single catch at Florida in 2020, making 43 grabs for 770 yards. He also is pretty good on the defensive end as a blocker who wrestles and is a pest to the opposition offensive lines. He could be the first TE to be drafted in the Top 5 since the 1972 draft.

One of the surprising prospects of this 2021 NFL Draft is Trey Lance, who only had 17 starts at North Dakota State and a win-loss record of 16-0. He also scalped 28 passing touchdowns with 14 rushing touchdowns, without any interceptions. Very ultra-competitive on designed QB runs, displayed build-up speed and power. He is going to need some time to develop and it would be a great pick to bet on his level of skill set, competitiveness and cautious decision-making.

Ja’Marr Chase was one of the players who opted out of the 2020 NFL season. In 2019, he was the top receiver for Joe Burrow at Louisiana State University. He recorded 1,780 receiving yards and 20 touchdowns in 2019, including two scores in the very crucial LSU game as they beat Trevor Lawrence’s Clemson in the national championship game. At 6ft, he is a very dynamic playmaker who provides a physical presence outside with many seeing him as a faster version of three-time Pro Bowl selectee Anquan Boldin.

Waddle though a slightly undersized receiver is known for his extraordinary speed and playmaking ability. He has the ability to line up inside or outside with his quick release considered by many to be of elite level. In the air, he’s got a really great vertical and feels at home on runaway routes. He’s one of the most talented kickoff and punt returners to enter the NFL over the last decade as observed by many NFL veterans and analysts. Overall, they all see him and compare him to the ability that Tyreek Hill, the Kansas City Chiefs wide receiver is famous for in the NFL.

As an offensive tackler, Sewell protected the blindside of the 2020 NFL Draft’s first pick Joe Burrow. At 6ft 6in and 330lbs, Sewell offered plenty of protection as he had a huge frame, quick feet and strong hands. His foot quickness to kick out and cover up speed rushers in the passing game due to his wide wingspan. Sewell does some special things in the run game as he has the ability to uproot defenders over his nose and he is explosive as a puller. Sewell, as a defender, isn’t the most polished blocker in this class, but he does offer the most upside in terms of defensive solidity in a very ‘offensive talent’ heavy draft.

Every year, the NFL holds its annual Draft spectacle, a three-day event encouraging the league’s newest players to the grandest stage of professional sports. The next wave of NFL starlets are about to ascertain spots from where they will start their NFL journeys. NFL, as a global sport, attracts more eyeballs than any of the American major sports so expectations for them are to become immediate contributors of a great economical and sporting product.

The original idea behind creating the draft was to increase the competitive parity between the teams by closing the gap as the worst team would receive the chance to choose the best player available. The NFL with this system has delivered results consistently and aims to continue with that tradition once the 2021 NFL Draft is over.