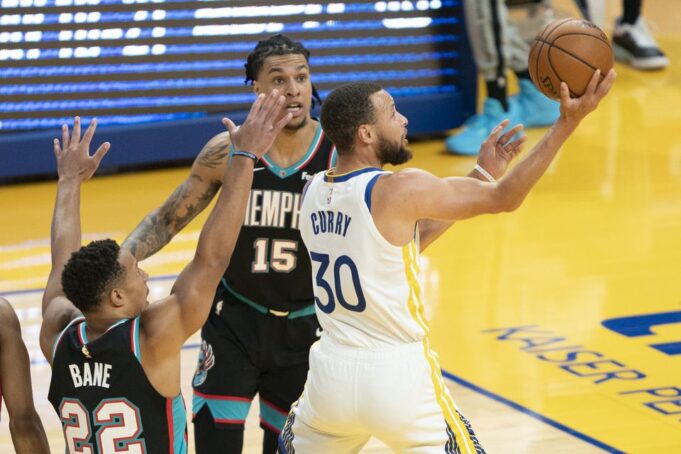 The Memphis Grizzlies are coming off a good win against the San Antonio Spurs. It was a do-or-die match for the Grizzlies and they came out on the top. While for the Golden State Warriors, it was a heart-break against the Lakers, as they were leading the Latter most half the game. Stephen Curry missed the shot at the buzzer, succumbing to defeat against the arch-rivals Lakers. Now they have another chance to confirm their place in the playoffs. Here, we will share all the details of the Warriors vs Grizzlies kickoff time, Live stream, Tv channels, etc.

The Memphis Grizzlies are running high on confidence, winning six games out of their last seven games.  In this run, they have defeated 4th seeded Dallas Mavericks in the regular season’s game and the San Antonio Spurs in the play-in tournament.

The Grizzlies started brightly in their first play-in game against the Spurs. They quickly jumped to a 21-point lead in the first quarter but had to fight off the resilient Spurs, who came back strongly and carried the game to the stretch. The game finishing on 100-96 in the favor of the Grizzlies, showing a close contest between the two.

While the Warriors had a wonderful start to the game against the defending champions. At the end of the second quarter, the Warriors led the Lakers by 13 points, with the score being 55-42. Andrew Wiggins came up big keeping LeBron James in his pocket for most of the first half. James was able to score only 6 points in the first quarter. While Curry as usual was at his best, scoring triple at will. But the Warriors couldn’t continue their good work, losing out narrowly.

Golden State Warriors will take on the Memphis Grizzlies on May 21st, 2021 at 09:00 PM ET time at Chase Center Arena, San Francisco, California.

The Warriors will return to their Home ground in quest of their place in the playoffs. While the Grizzlies will have to travel to California for confirming their fate of the playoffs.

ESPN and TNT network in the USA will be telecasting all the live action of the Warriors vs Grizzlies. You can watch all the live-action on these networks. But if you are not living in the USA, you can watch the live game on the following channels given in the table.

You can contact your nearby Cable Tv operator or Satellite channel provider to get access to these channels. But in the Modern Era of technology, you have the facility of portable devices like Firestick and Google Chromecast. All these channels are available on the devices.

How to watch Warriors vs Grizzlies online -live streaming

How to watch Warriors VS Grizzlies online for free -Live streaming

All the above-mentioned passes are paid ones. But some of them allow you to enjoy the live stream for 7 days like fuboTV. But for long-term free streaming, you can use the following applications that I am going to list. These applications are malware-free and do not hinder the live stream.

Many Reddit NBA sites got banned in 2019 due to copyright reasons. So, sports surge and nbabite have come up with replacements for the NBA fans around the world. You can watch every game for free here without any trouble with the streaming.

Here is the complete roster of the Golden St. Warriors for the play-in tournament

The Memphis Grizzlies comprises a young team. They have shown improvement from their last season when they were booted by the Portland Trail Blazers in the play-in tournament. But now they have a chance to make it into the playoffs for the first time in 4 years. Their last appearance came back in 2017 when they lost against the San Antonio Spurs by 4-2.

But now they have avenged that loss by eliminating the Spurs in the first of their two qualifying matches in the Play-in tournament.

Memphis Grizzlies started the season with losses against the arch-rivals Spurs and the Atlanta Hawks. But they started to find their feet as the season progressed. The Grizzlies strung up some wins and were labeled as the dark horse in the league. The second-year Ja Morant was again at his very best, continuing his good work after the great first season with the Grizzlies as a rookie. The 26 years old, Dillion Brooks, was able to link with Ja Morant, and carry the Grizzlies to the Play-in tournament.

The Grizzlies have a pretty good run lately, only losing once in their last six games. But the worrying point for the Grizzlies is that the loss came against the Five times champions who the Grizzlies will be facing next to confirm their place in the playoffs.

Golden State Warriors had an upper hand, most of the time against the Lakers, losing marginally with the score on the night being 103-100 in the favor of the Lakers. The California side will go into this match as a favorite, considering their previous record in the post-season and the experience they have in their roster. But they will be up against the determined Memphis Grizzlies who have every chance to upset the Warriors. So, it will be a tough job for the Warriors to get past the Grizzlies.

Key Duels Between the Warriors vs Grizzlies

Stephen Curry scored 37 points against the Lakers in their first play-in game, along with 7 rebounds and 4 assist to his name. The Ohio-born Guard was unable to bucket three-pointer at the end of the game, giving the defending champions Lakers the 7th seed. Curry has scored 110- 3 pointers this season and since coming back from the injury which kept him out of almost half of the first season, the 26 years old guard has been phenomenal. Curry has bagged the title of the most points scored this season leaving the Wizards’ Bradley Beal at the second spot, who is having the best season of his career.

Stephen Curry will be up against his counterpart, Dillon brooks. Brooks kept Curry shut in the regular-season finale against Golden State Warriors, but a brain fade in the last quarter resulted in him being removed from the game. After his ejection, Curry came to the life and outscored the Grizzlies with his 3 pointers.

Brooks will be going into this game on the back of a phenomenal performance against the Spurs, scoring a game-high 24 points.

His stout defense against the three-time champions will be a matchup to be watched when the two will meet on a Friday night.