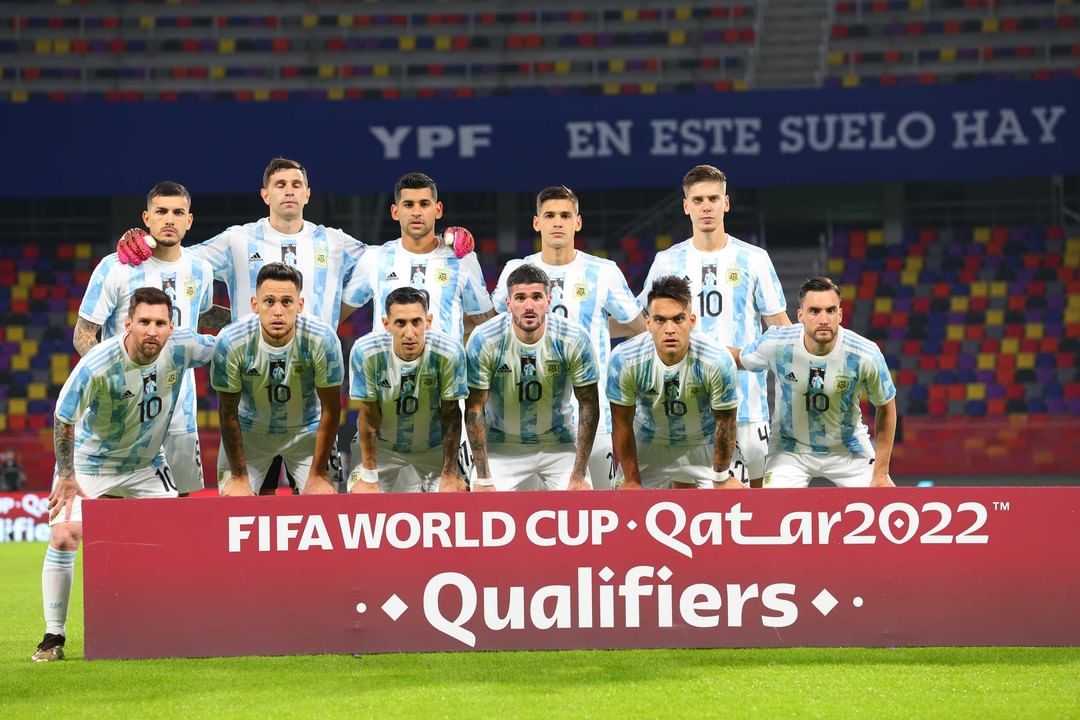 The Argentina National Team qualified for the upcoming FIFA World Cup 2022 through the CONMEBOL qualifiers. The ten South American teams had to go through a round-robin tournament. Hence, every team played every other team twice. Once home and once away from home. Argentina Football Team ended in the second position after Brazil. But, the difference between the two sides was a massive six points. This means Lionel Messi will play in another World Cup tentatively. Thus, this would be his last dance to win the coveted prize.

The Argentina team played a total of 17 games. They should’ve played 18 but the game against Brazil was suspended due to a breach of COVID 19 protocols. Therefore, both Brazil and Argentina played a game less compared to the other eight teams in the CONMEBOL World Cup qualifiers. Yet, these two South American heavyweights ended first and second on the league table. The game between them will be played later. The date and time for the same are yet to be announced.

Argentina National Football Team kept their tournament fairly professional. There were no extravagant victories, unlike European teams. The first game against Ecuador ended in a 1-0 victory for the sky blues. Lionel Messi’s 13th-minute penalty brought home the first win and the first points. On matchday 6, the clash of the heavyweights, Brazil and Argentina was scheduled. The match as stated above was suspended.

Lionel Messi decided to have some fun against Bolivia on matchday 10. His hattrick meant a 3-0 win for the Argentina National Team. They also overcame one of the better South American sides, Uruguay. It is of course a team filled with superstars like Edinson Cavani, Luis Suarez, and Fede Valverde. Yet, Lionel Messi’s Argentina Team was leagues apart. They thrashed them 3-0. They rounded off their campaign with 11 wins and six draws and not a single defeat. All of it accounted for 39 points and a second-place finish.

The Argentina Football Team won the Copa America cup recently and since then, the side has been unbeaten. But, there has been a few draws here and there. The latest draw was the last game of the qualifiers which they played against Ecuador. It was a 1-1 draw which spoils Argentina National Team’s three-game winning streak. The unbeaten streak is an unbelievable 31 games running.

There are two major missing in the Argentina team right now. Firstly, CF Lautaro Martinez has contracted the COVID virus and will be sidelined until recovery. But, the major issue is center-back Lisandro Martinez’s muscular injury. Details of the same are yet to be confirmed and there aren’t any updates on his expected date of return.

Strength and weaknesses of the Argentina national team

Argentina National Team stands out as a well-drilled side. It isn’t a side that has a lot of star power but it’s a side that is functional together. They are great at defending narrow leads and sneaking wins away as they have done in most of their qualifying games.

However, Argentina National Team could use more firepower in the central midfield and defense. Players like Otamendi and Romero aren’t the ones you can be confident with while facing opponents like France or England who play fast, counter-attacking football. Players like Guido Rodriguez and Lo Celso also do need to find their footing before they advance to play in the World Cup.

Arguably the best footballer on the planet, Lionel Messi would once again take the pitch for Argentina National Team in yet another World Cup. As always he’d be a key player for the South American Champions. The goalkeeper, Emiliano Martinez is someone who has kept them alive in so many key matches, Argentina will hope he stays in similar form at Qatar too.

Players like Angel Di Maria, Rodrigo de Paul, and Paolo Dybala are always important when talking about Argentina. Lautaro Martinez is also one key goal scorer who can come in handy for the Argentina National Team.

Argentina national football team players to watch out for

23-year-old Udinese right-back Nahuel Molina has been a useful player for the South American Champions in the qualifiers. He could make a big impact in the upcoming World Cup with the Argentinian National Team’s defense already needing more reinforcements. He’s a possible breakout star to look out for.

River Plate is a special club as far as channeling talent goes in the footballing world. Their 22-year-old forward Julian Alvarez, on loan from Manchester City, has been a name on several European scouts’ lips.  He is one to keep an eye on as City is keen on selling their younger products. Moreover, the restrictions imposed on loans could mean a change is in the loading for the youngster.

The Qatar World Cup 2022 will be broadcasted by various official broadcasters throughout the different parts of the planet. Sony Network has acquired the rights for the Indian Subcontinent. The several channels on the Sony lineup will help Indian fans catch Argentina match live stream.

In the UK, the broadcasting rights of the FIFA World Cup are with BBC. Fans in the UK should be able to catch the matches on the ITV website and application, the BBC iPlayer, BBC News, and BBC Sport. This is best for free Argentina live football TV streaming.

Fox Sports will run English telecasts within the USA. And, the Spanish network – Telemundo will broadcast the action in Spanish. To catch the action without tuning into your TV, OTT viewers can turn to fuboTV, SlingTV, Hulu+ Live TV, AT & T TV Now or Youtube TV live streaming football.

beIN Sports and Al Jazeera will telecast in the MENA region. 2Sport2 will help viewers in Qatar and pay-TV in Russia. In Greece, Antenna TV will handle telecasts. In Italy, Rai will be the concerned broadcaster. MEDIAPRO Network has exclusive telecast rights for Spain.

Bell Media is the concerned broadcaster for Canada. Brazil’s largest media company, Globo will make broadcasts in entire Brazil and the Caribbean. China Central Television (CCTV) is expected to broadcast in China.

Argentina Match Live Stream will be available on a lot of platforms. It is arguably the biggest sporting festival in the World. So, a variety of sources would provide streaming services for the FIFA World Cup 2022.

For official paid services, OTT platform partners like Sony Liv, BBC iPlayer, Hulu +, and YouTube TV is the best place. Viewers can easily rely on these services, given they have a paid subscription. For people who would want to stream these games for free, here is a list of recommended Argentina live football streaming sites for FIFA World Cup Live Streaming.

Other than these, most major governing bodies of football like UEFA, FIFA, Conmebol, AFC, etc. will extend their own broadcast services. This will be free through their official sites or a YouTube or Facebook live stream extension for the whole Qatar World Cup schedule. These streams being official in nature can be trusted for quality. This is the best free live football streaming. We at Sports404 will update relevant information about Argentina live football TV streaming services whenever new information surfaces around Qatar 2022 World Cup.