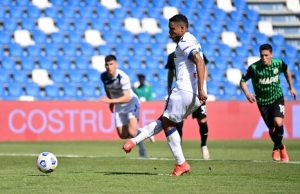 Atalanta Bergamasca Calcio or Atalanta B.C. based in Bergamo, Lombardy has risen to the limelight in the past few seasons with their attractive style of play, a unique tactical set-up, and a manager, Gian Piero Gasperini, who has proven his mettle as one of the best in Serie A with his squad management and tactical prowess, qualifying for Champions League two seasons in a row, and reaching the quarter-final in their debut UCL campaign.

They’ve maintained their standards and have been consistent in their performances this season, as they are on the verge of qualifying for the champions league for the third year in a row. Even after losing their brightest prospects and key players, their recruitment seems to help maintain their system and build a team from players who fit the team, the squad, and the standards demanded perfectly.

Their strike force of Luis Muriel and Duvan Zapata has been prolific, to say the least, as they have pushed Atalanta a step closer to establishing themselves as European regulars. They have scored a combined 43 goals in 87 appearances, further assisting 19(Luis Muriel – 23 goals, 9 assists; Duvan Zapata – 18 goals, 10 assists). Josip Ilicic, Robin Gosens, Alexey Miranchuk are also notable contributors in terms of goals and assists. The whole squad has been seen in action either as a provider or a goal scorer, which further emphasizes their ability to not depend on a few players to bail them out of games.

Sitting second in Serie A, they look set for another qualification into the European competitions next season. They have won 20 matches, drawn 9, and lost 5 of their 34 matches played this season accumulating 69 points. They are on an excellent run, losing once in the league since the start of February, winning 10 games and drawing 3, which came against the new Serie A champions, Inter Milan.

How can I watch Serie A free live stream?

How to live stream Serie A matches on Roku and Smart TV?