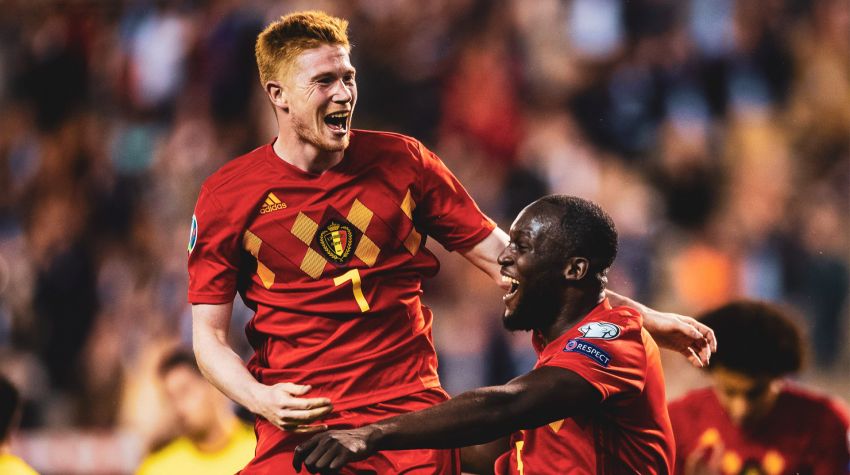 The Belgium National Team justified their World Rankings. They sailed through their qualifying games without a single defeat. The group included Wales, the Czech Republic, Estonia, and Belarus alongside the Red Devils. They were the dominant force. Gareth Bale’s Wales could only come as close as the second spot with five humongous points separating the two teams. The rest was all easy sailing for the former semifinalists.

The very first game was enough for fans to understand that Belgium National Team was the clear winner in Group E of the UEFA Qualifiers. The Red Devils were up against their closest competition in the Group, Wales, led by the Welsh Dragon, Gareth Bale himself. With goals from Thorgan Hazard, Kevin de Bruyne, and Romelu Lukaku, Belgium dropped a statement performance in a 3-1 victory.

Unlike the highflyers they usually are, Belgium National Football Team had to settle for a 1-1 draw against the Czech forces. Romelu Lukaku added another goal to his tally. This was followed by an absolute attacking masterclass against Belarus. The Red Devils scored eight goals and conceded none. Hans Vanaken and Leandro Trossard bagged braces in this game.

Belgium National Football Team went down to an early goal against Estonia but they came from behind to go from 1-0 down to 5-2 up by the final whistle. The game showed that the Red Devils had a tremendous character in the squad to come back from losing positions. Two clean sheet victories with the scorelines of 3-0 and 1-0 against the Czech Republic and Belarus respectively made it five wins out of six games.

The final two games included a standard Belgian victory over Estonia where the Belgium Team scored three and conceded one. The last match was again with Wales and the Welsh side made a considerable improvement that looked much more like a competition between two recognized European Footballing powers. The game ended in a justifiable 1-1 scoreline with Kevin de Bruyne scoring the first goal and Kieffer Moore equalizing before halftime.

Belgium’s Euro 2020 campaign that coincided with the qualifiers was another noteworthy performance in an important international competition. The Red Devils reached the quarterfinal stages where they were knocked out by eventual winners, Italy. Romelu Lukaku was the top scorer for Belgium National Team in the European Championship with four goals. He was also their top scorer in the qualifiers with five goals.

Roberto Martinez’s men are simply flying to put it briefly. Leaving the Euro exit at hands of Italy aside, they haven’t lost a single game since March 2021, the start of the Qualifiers. The unbeaten run is five matches. When we consider the UEFA Nations League, the Red Devils may not fare that satisfactorily. They lost the semifinals to France and yet another loss to Italy meant that they would only end fourth in the friendly tournament.

There is one major injury concern for Roberto Martinez’s Belgium National team in the right-back, Thomas Meunier. A torn tendon is a major problem, he has been sidelined since February and nothing can be assumingly stated about his return.

Strength and weaknesses of the Belgium national team

Belgium National Team has one key advantage over other teams and that is their efficiency from long range. Kevin de Bruyne is one of the world’s sharpest distance shooters and he tries to make that difference count every time he takes the pitch for his country. The Red Devils are experts at finishing off scoring chances and creative enough to produce clear chances with greater regularity.

The Belgium Team’s weakness is as obvious as their strengths and that is their vulnerability at the back. They lack younger legs in central defense which is why they are vulnerable to fast-paced counter-attacking football as was seen in Euro 2020. The first-choice center-back pairing of Toby Alderweireld, Thomas Vermaelen, and Jan Vertonghen are all more than 30 years old and they have lacked pace while marking speedy forwards like Kylian Mbappe in the recent past.

Goalkeeper Thibaut Courtois is one of the World’s best, based on his current form. He is enjoying the best season in his career and would be a big key to success at the World Cup for the Belgium Team. Kevin de Bruyne would be their main man in midfield. Belgium plays a lot through him and is heavily dependent on his creative playmaking abilities.

The powerhouse in front of goal, Romelu Lukaku hasn’t fared well as a moved to his new club, Chelsea. But, when in that Belgium National team Kit, the striker has been an unstoppable force. He’d be their man resort for a pure goal-scoring forward.

Belgium national football team players to watch out for

Rennes’s young midfielder Jeremy Doku would be a must-monitor player in the Belgium National Team. He has been one of the brightest young players in Euro 2020. In the qualifiers as well, Doku played only one game but the 19-year-old made his mark with one goal and two assists, bagging a MOTM performance.

The 22-year-old, Alexis Saelemaekers of AC Milan is another player who could possibly play his football in a much bigger European club. He’d be hunting his breakout moment in his national colors in the upcoming World Cup 2022 in Qatar.

Sony is available on Net TV Nepal and Sim TV Nepal for fans in Nepal. For Sri Lanka, the concerned channels are SLRC (Eye Channel), Dialog TV, and PeoTV. In the Maldives, Medianet will telecast Sony’s coverage. Additionally, the OTT platform called Sony Liv will also run the same coverage.

In the UK, the broadcasting rights of the FIFA World Cup 2022 lie with BBC. Users should be able to catch the games on the ITV platforms, BBC iPlayer, BBC News, and BBC Sport. This is the best free Belgium live football TV streaming.

Fox Sports has exclusive rights for telecast within the USA in English language. The Spanish network – Telemundo will telecast all their action in Spanish. To catch the action on OTT plaftorms, viewers in the USA can turn to fuboTV, SlingTV, Hulu+ Live TV, AT & T TV Now or Youtube TV live streaming football.

beIN Sports alongside Al Jazeera will telecast action for the MENA region. The 2Sport2 will serve the users in the host nation, Qatar, and pay-TV will be helpful for Russian fans. Antenna TV will broacast within Greece. In Italy, Rai network is the official broadcaster. MEDIAPRO Network has the exclusive rights for Spain.

Bell Media will telecast in Canada. Brazil’s Globo network will handle broadcasts in entire Brazil and the Caribbean. Lastly, China Central Television (CCTV) is expected to broadcast within China.

Belgium Match Live Stream will be available on various destinations on the Internet. The FIFA World Cup 2022 is arguably the biggest sporting event in the Globe. Therefore, a lot of sources would provide streaming services for the same.

For paid services, official OTT platform partners like Sony Liv, BBC iPlayer, Hulu +, and YouTube TV are available. Fans can easily rely on these official paid services. For users who would like to stream these matches for free, here is a list of recommended Belgium live football streaming sites. These will serve useful in FIFA World Cup Live Streaming.

Other than these, all major governing bodies of football like UEFA, FIFA, Conmebol, AFC, etc. will extend their own broadcast services without any cost. This will be done through their official sites or a YouTube or Facebook live stream extension for the whole Qatar World Cup schedule. These streams are totally official in nature. They should be reliable in quality. This is the best free live football streaming. We at Sports404 will update relevant information on Belgium live football TV streaming services as and when information surfaces about Qatar 2022 World Cup.