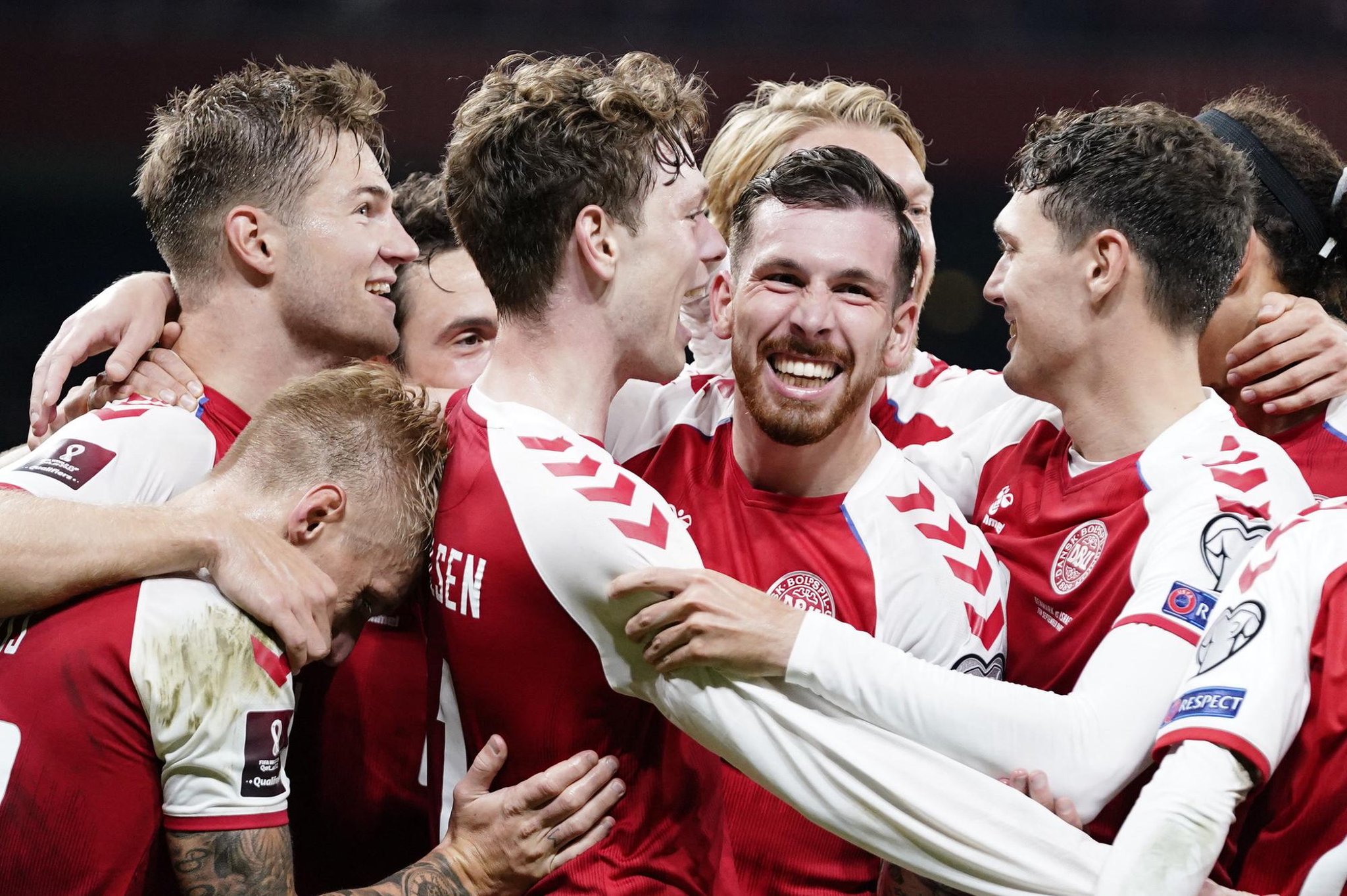 Denmark won Group F of the UEFA World Cup Qualifiers in a handsome fashion. The Denmark national team would be the dark horses of the 2022 FIFA World Cup at Qatar. Scotland, Israel, Austria, the Faroe Islands, and Moldova were placed in the same group. Denmark team still faced competition from teams like Scotland and Austria. Yet, they emerged as heroic winners with nine wins and only one loss in their ten games.

The Red and Whites kicked their campaign off in dominant style with a 2-0 win over Israel. Martin Braithwaite and Jonas Wind got on the scoresheet. The Denmark National team literally taught how to play football to their Moldovan counterparts in the next game. They won 8-0 with six different scorers and Mikkel Demsgard scoring a brace.

David Alaba’s Austria proved to be no match for the Denmark national team as the Red and Whites sailed to a third consecutive win with a 4-0 margin, this time Andreas Skov Olson bagged a brace. The game against Scotland was much closer. Judging by the standards they had so far set in the qualifying campaign. It was a plain and simple 2-0 win for the Danish with goals from Daniel Wass and Joakim Maehle.

The surprise package was the Faroe Islands team who proved to be a hard nut to crack for the Denmark football team as they had to wait until the 85th minute to find the winner scored by Jonas Wind. They returned to exhibiting top-level attacking football in the next game against Israel as they registered a thumping 5-0 win. The attack continued in top fashion as another 4-0 win against Moldova would bring Denmark National Team a seventh straight win.

The second encounter against Austria was much closer than the first one and a lone goal from Joakim Maehle remained the difference between the two sides at full-time. This was followed by a 3-1 win against the Faroe Islands who had troubled the Denmark National Football Team in their first encounter. This time, they sailed through easily. The Denmark team could’ve made it 10 out of 10 but they lost the final game comprehensively against Scotland, two goals to none.

Sandwiched between the qualifiers was the European Championship, a tournament that the Danish fans would remember for a long time for the unfortunate mid-game collapse of Christian Eriksen. The Denmark National Team reached the semifinals of the competition where they were eliminated by England beating them 2-1, courtesy of Harry Kane’s 104th-minute winner.

Kasper Hjulmand’s Danish side has established itself as a side to beat. Unlike their uncharacteristic presence in past competitions, they’ve been more than just impressive in the Euros. The qualifying campaign for the Denmark National team has been near perfect with only one loss to Scotland that sadly ends their winning streak of six games.

There are three major injury concerns for the Denmark Football team right now. First, central midfielder Daniel Wass has ruptured his ligament, and his current club, Atletico Madrid hasn’t yet specified when he is set to return. Center-back, Simon Kjaer is out with a cruciate ligament rupture and should be back into action by June. Christian Eriksen’s heart condition is the last health problem that Denmark national team has to deal with.

Strengths and weaknesses of the Denmark national team

Denmark has found itself an expert free-kick taker in Mikkel Demsgaard and the threat from set-pieces the highest for any defense playing against Denmark. As is obvious from all the dominant scorelines previously talked about, Denmark’s attacking play is lethal and they only go for more goals after scoring one.

The only weakness for the Denmark Football team is their defense. They struggle defensively against better attacking sides as they did against Belgium and England. The over-commitment in attack leaves spaces in wider areas and they are vulnerable to conceding during counter-attacks. Otherwise, the squad is adept at holding the ball for long possessions and holding on to narrow leads.

The experienced goalkeeper and Captain Kasper Schmeichel would be the absolute key to their World Cup campaign. If Christian Eriksen plays he’d be an important campaigner from a leadership sense and creative sense. Mikkel Demsgaard would be the main set piece taker while players like Martin Braithwaite, Kasper Dolberg would be the main goal-scoring options. Dolberg was the team’s highest scorer in the Euro 2020 with three goals. The honor was shared between Maehle and Skov Olson for the qualifying rounds with five goals each.

Denmark national football team players to watch out for

The 22-year-old Andreas Skov Olson has already announced his arrival into International football with his five goals in the Qualifiers for Denmark National team. He’d be one key player that the Scouters will look out for. Any club looking for more attacking involvement from their number 10 should go after him. Victor Nelsson who plays for Galatasaray is an impressive young center-back who seems to have his future set for a big European career, he is one looking for a clear breakout moment. Jonas Wind is another goal-scoring forward who could break out in the real sense and attract a bigger club than Wolfsburg.

In Nepal, Sony’s services are available. They can be accessed on Net TV Nepal and Sim TV Nepal. For Sri Lanka the case is similar. The concerning channels are SLRC (Eye Channel), Dialog TV, and PeoTV. In the Maldives, Medianet will mirror Sony’s FIFA World Cup coverage. Moreover, the OTT platform called Sony Liv will also feature the same coverage on its website and mobile/PC applications.

In the UK, the BBC has all broadcasting rights for the Qatar Football World Cup 2022. Viewers should be able to catch the soccer games on the ITV website and applications alongside the BBC iPlayer, BBC News, and BBC Sport. This is the best free Denmark live football TV streaming.

Fox Sports has exclusive rights for English soccer telecasts within the USA. Telemundo will run the same telecast in Spanish. The soccer games can also be accessed in the USA through fuboTV, SlingTV, Hulu+ Live TV, AT & T TV Now or Youtube TV live streaming football.

beIN Sports and Al Jazeera will telecast action for the entire middle east and North Africa. The 2Sport2 will serve the soccer viewers in Qatar, and pay-TV in Russia. Antenna TV will handle soccer world cup telecasts within Greece. In Italy, Rai will be the primary broadcaster. MEDIAPRO Network has the same rights as Spain.

Bell Media is the concerned broadcaster in Canada for the soccer world cup. Globo will handle broadcasts in the entire Brazil and the Caribbean. China Central Television (CCTV) will broadcast action inside Chinese territory.

Denmark Match Live Stream will find features on various online platforms. The FIFA World Cup 2022 is arguably the biggest sporting spectacle in the World. There would be a lot of sources that would provide paid and free streaming services for the Tournament.

For paid services, there are many options. Official OTT platform partners like Sony Liv, BBC iPlayer, Hulu +, and YouTube TV will be the best place. Fans can easily rely on these services if they have a paid subscription of any such platform. For others who would like to stream these soccer world cup matches for free, here is a list of recommended Denmark live football streaming sites. These have best links in FIFA World Cup Live Streaming.

Major football governing bodies like UEFA, FIFA, Conmebol, AFC, etc. will extend their own broadcast services for free. Their official sites will employ a YouTube or Facebook live stream extension. They’ll remain active for the whole Qatar World Cup schedule. These soccer streams are official and verified in nature. These are highly reliable in quality. This should be the best free live football streaming. We at Sports404 will update relevant information on Denmark live football TV streaming services as and when information surfaces around Qatar 2022 Soccer World Cup.