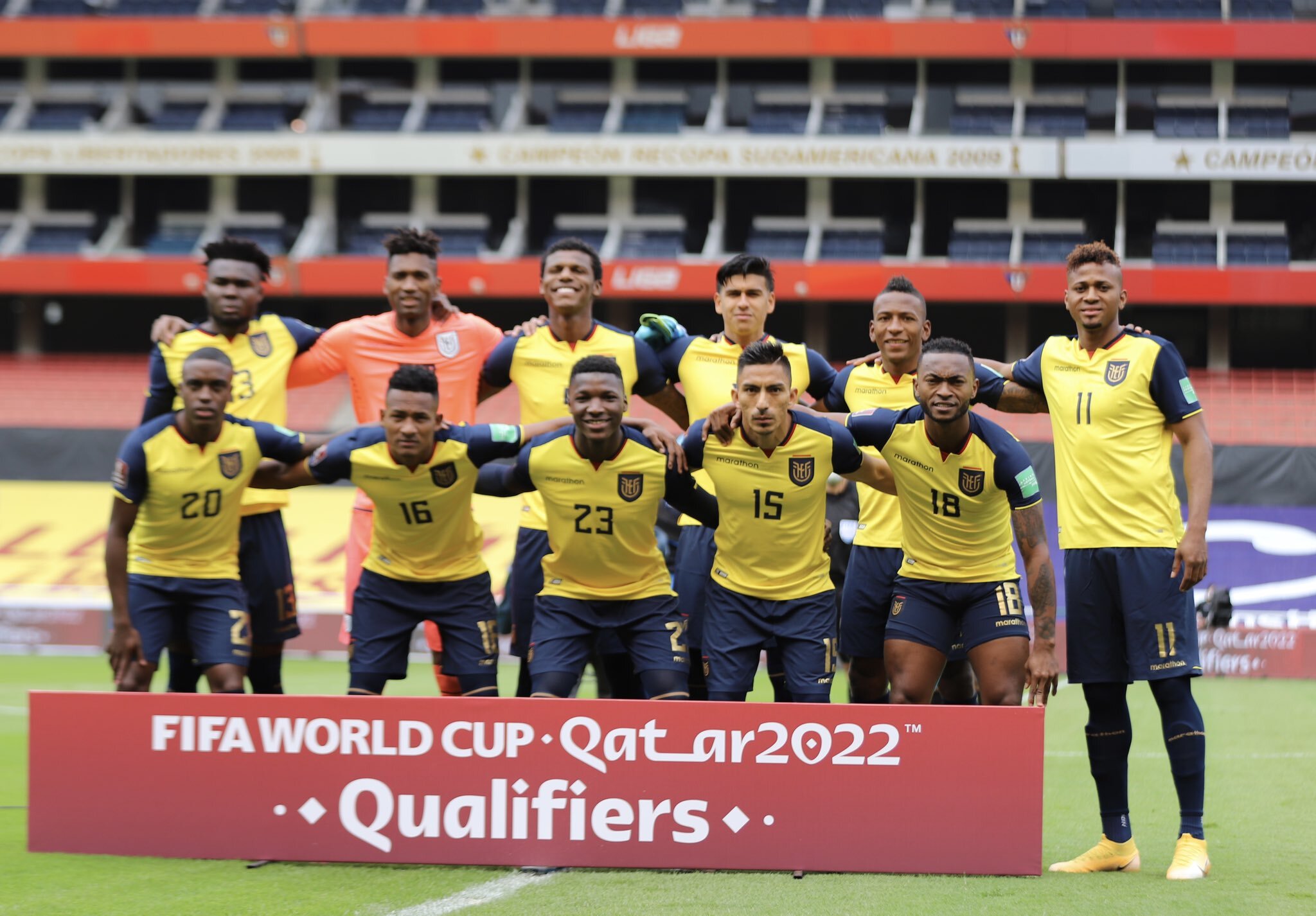 The Ecuador Football Team qualified for the upcoming FIFA World Cup 2022 through the CONMEBOL qualifiers. The South American teams went through a league phase for the qualifying tournament. Hence, all ten participating teams had to play every other team twice. Once home and once away. This accounted for a tally of 18 games for all participating South American nations. Ecuador ended in the fourth position to qualify for the final top four quotas for CONMEBOL. However, the gap between them and third-placed Uruguay was a minute two points.

For all concerned, Ecuador Football Team can be extremely proud of their campaign. Brazil and Argentina were leagues ahead of them. Ecuador still managed to pull off something special. They will have the four direct qualifying spots to thank. But, the truth is that they were within a game of finishing third. There were some valiant performances against the likes of Uruguay and Colombia. This means that Ecuador Football Team can be genuinely proud of their efforts.

They started the campaign on the wrong note. But restricting Argentina to just a 1-0 defeat can also be termed as an achievement. They cruised to four consecutive wins after this. They thrashed Uruguay 4-2 and Colombia 6-1 on their way. These were clear statement wins regarding their intentions for the qualifiers. They, however, lost two after this. One against Brazil and the other against Peru.

After a long Copa America break, Ecuador Football Team resumed their campaign. The first game was a comfortable 2-0 win against Paraguay. Up next, the concluding phase of the qualifiers was a mixed bag for the Ecuador football team. They won only one, a 3-0 win against Bolivia. Both Columbia and Chile held them to 0-0 stalemates. And, they lost two against Uruguay and Venezuela.

The record for Ecuador Football Team was seven wins, five draws, and six losses. This accounted for 26 points. Just two points were short of Uruguay who finished third. This was one valiant effort from the underdogs. They’d look to play their best football at the World Cup. And, try progressing as deep as they can in the competition.

Thanks to the horrible finish to the qualifiers. Ecuador National Team’s recent record doesn’t look good at all. And, it is also not one bad game to blame. They are on a struggling note right now. They need to improve to start the World Cup in good touch. It is just a one-game unbeaten run. And sadly, there is no winning streak to report.

The silver lining here, however, is that there aren’t many medical problems. The Ecuador national football team player Carlos Gruezo is the only concern. The defensive midfielder has experienced muscular problems since April 1, 2022. There hasn’t been an update yet. But, with muscular issues, no one cannot be very sure. Hopefully, it is not a long issue.

Strengths and weaknesses of the Ecuador team

The Ecuador Football Team has a recognizable defensive contingent.  Players like Felix Torres and Estupinan are included. But, they haven’t had similar support from the forwards. The midfield is decent too. But, overall, it is no match for a strong tactically adept European side. The games against Argentina and Brazil are testament that they are vulnerable at the back. Also, they would appreciate a better goalkeeping option than Hernan Galindez.

However, Ecuador excels at one point. And, that is a constant point for all South American teams. That is the character and belief this Ecuador football team carries. After all, they could restrict Argentina to just 1-0. Similarly, Ecuador had valiant performances against Uruguay and Colombia. The team is well aware tactically. It will come down to athleticism as they walk into the World Cup with a decently talented squad.

First of all, the three experienced defenders, Felix Torres, Luis Fernando Leon, and Estupinan will be tested to their limits. They need to stay strong at the back if Ecuador is to lead an impressive campaign. Next, probably Ecuador national team’s best player, Damian Diaz needs to continue his midfield exploits. A lot would be played through him.  Therefore, he needs to anchor everything up for his side.

Micheal Estrada is their prime goal scorer. His contributions have been decisive for Ecuador in the qualifying campaign. It would be the same for the world cup. He is very much key to this Ecuador national team’s attack.

Ecuador national football team players to watch out for

There are two players in particular that Ecuadorian fans will have high hopes from. First is Bayer Leverkusen’s 20-year-old center-back Piero Hincapie. A lot of top European teams are resorting to young center-backs. This is due to the rising need for athleticism in the modern-day game. As such, a breakout performance from this young man could land him up at a better club.

The next player is Brighton’s central-midfielder Moises Caicedo. He is also a 20-year-old. He would be on the lookout for his future and the World Cup is a good chance. Given the poor run of form for Goalkeeper, Hernan Galindez, the young Moises Ramirez might get his chance. If he does, a lot of eyes would be on him as well.

There’s no shortage of broadcasters around the world to cover the event. TV giant, Sony Network owns the rights within the Indian Subcontinent. The numerous Sony channels are where fans watching inside India can watch Ecuador match live stream.

Sony’s service is also accessible from Nepal on Net TV Nepal and Sim TV Nepal. It is similar to the audiences in the Island nation of Sri Lanka. SLRC, Dialog TV, and PeoTV will help. For all watching from the Islands of Maldives, Medianet is mirroring this service.  Sony Liv, an OTT platform, will provide coverage for its users.

BBC currently holds exclusive TV broadcasting rights of the FIFA World Cup inside the UK. Audiences in the UK can watch the upcoming Soccer World Cup on the ITV website, mobile/PC applications, and the BBC channels. This is the resort for the best free Ecuador live football TV streaming.

Sporting giants of the USA, Fox Sports, has the right to English language telecast. On the other hand, Telemundo is operating telecasts in Spanish for their audiences in the states. Various western OTT platforms like FuboTV, or Youtube TV live streaming football also extend quality coverage.

Al Jazeera and beIN Sports will cover the upcoming World Cup 2022 for the football fans of the MENA region. 2Sport2 has TV rights inside Qatar and pay-TV does so on the Russian mainland. Moreover, the Antenna TV network service is all set to handle coverage within Greece. In Italy, Rai has all the TV rights. Mediapro does so inside the Spanish mainland.

Bell Media is the sole owner of TV broadcast rights for Canadian fans. Brazilian television giant, Globo has prepared to telecast in entire Brazil and the Caribbean regions. And finally, China Central Television will maintain its telecasts for soccer fans in China.

Ecuador Match Live Stream will be available on many platforms. The upcoming FIFA World Cup is arguably one of the biggest sports festivals on Earth. So, there would be considerable traction among paid and unpaid streaming solutions to extend their services to audiences around the world.

Expensive services on official OTTs like Sony Liv, BBC iPlayer, Hulu +, and YouTube TV will provide the best audio-visual quality. People can trust these services blindly for an uninterrupted viewing experience. The essential requirement is a paid subscription to any such OTT platform. Many else from different parts of the world are wishing to watch these World Cup games without paying. Here is a list of recommended Ecuador live football streaming sites. These websites will have reliable hyperlinks for FIFA World Cup Live Streaming.

Footballing authorities include UEFA, FIFA, AFC, CONMEBOL, etc. They will extend their own broadcast services. The various official websites of these authorities will have YouTube or Facebook live stream extensions. It will function for the entirety of the Qatar World Cup schedule and are free of cost. The streams are officially verified for extending the highest quality coverage. Therefore, this is the best free live football streaming. We at Sports404 will update all relevant information on Ecuador live football TV streaming services. Whenever more information is out about the 2022 FIFA World Cup we’ll be alert.