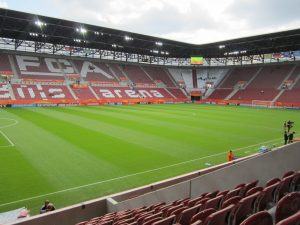 Augsburg had a managerial change in April. For all the Augsburg fans. Here are the live streams so that you don’t miss any of the games. Also find the upcoming fixture, squad, and much more.

With the recent defeat against VfB Stuttgart, Augsburg only has two games remaining before they complete their season. They are not yet safe from relegation. The relegation battle may go till the last matchday which is 22 May 2021. Here are the remaining fixtures. The time is standard UK time.

The match against Werder Bremen might seal the deal for them. They are 3 points behind Augsburg but with the matches, on the weekend it can change to the same points. Augsburg needs to defeat them to have some surety of Bundesliga next season.

Augsburg currently has only 33 points from the 32 games they have played. They only have 9 wins thought out the season. They are in pretty bad form. Since the managerial change, Augsburg has only won 1 game out of the 6 they played. They are winless for 5 games.  They need to wake up and play their best for the remaining games. Augsburg has been in this situation so they would be mentally prepared about how to overcome this.

Few players are the reason Augsburg is not at the bottom of the tables. Some of the key payers are Andre Hahn, Ruben Vargas, and Daniel Caligiuri. Augsburg has scored 32 goals this season. Andre has 7  registered to his name whereas Ruben and Daniel have 6 and 5 goals respectively. These count for half of the goals for Augsburg.