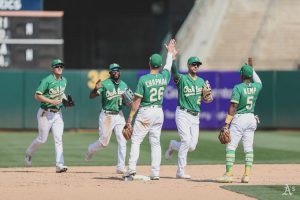 Oakland Athletics are currently in the 2nd position in the American League West division just behind the Houston Astros. They have almost confirmed their place in the postseason. But still, need to be extra cautious as the Seattle Mariners are pulling closer to them as the season enters the second half. The Athletics kept the pressure right from the beginning winning the matches consistently. They have some wonderful talents in their ranks and are a team to be followed. So, if you are an A’s fan, you should go through this article as here we will provide all the possible Oakland Athletics live stream sources.

Oakland Athletics has a star-studded lineup. On their day, they can destroy any opposition. Their first baseman Matt Olson has been in fine form throughout the season and has already hit 27 homers. He is currently in the 4th position for the most home runs. The 27 years old are also involved in the 66 RBI’s as well. If A’s are to make significant inroads this season, Olson needs to keep on firing on all cylinders.

When it comes to pitching, Chris Bassitt, and Sean Manaea are holding this end tightly. Bassitt is absolutely throwing fireballs this season as the 32 years old has already recorded 132 strikeouts this season. Manaea is also pivotal in keeping a tight check on opposition batters as he averages just 3.16 (ERA) runs per game. The A’s just need to hold their nerves as the regular season has entered the important phase.

How to watch the Oakland Athletics live streaming online?

Oakland Athletics have been making noise with their performances this season. Many experts consider them an outside favorite to lift the title. Besides this, their flamboyant gameplay also attracts many fans. You can catch all the live-action of the Oakland Athletics on MLB.TV. MLB.TV is most suitable for those fans who live outside Oakland, California. One of the frustrating features with MLB.TV is its local blackout restriction. As a result, local fans can only watch the A’s game after 90 minutes of live coverage.

To help all these fans, there is another application named AT&T TV. The mentioned live TV streaming service is best for the in-market games Athletics.

If you have a subscription to MLB.TV, you can watch the live game on your android and iPhone as well. But to watch the local game on the MLB app, you have to use a VPN, and change your IP address. It’s a quite tiring process, but it is worth watching as it brings a high-quality stream to your doorsteps.

Where can I watch the Oakland Athletics live streaming for free?

In the present world where a man hardly meets both ends, it will be difficult for him to spend a penny on these heavy passes. He will be looking for some other sources that can help his cravings. For all those people, we will mention some of the free sources.

Sling TV is one of the live tv streaming sources that allows you to enjoy a free 3 days trial. It covers most of the broadcasting channels that cover the Oakland Athletics games in and around the whole nation. One of the advantages of Sling TV is that it provides first-class live coverage and you can procure its subscription at a moderate price. So, you can spare 30 odds dollars for your monthly Sling TV subscription and enjoy the A’s game without any interruption.

It, another reliable source that provides a free starting trial to the newbies is Hulu + Live TV. it is better in a sense that it provides you a week for its trial purpose covering most of the broadcasting channels that cover all the local A’s games. But to mention it after the Sling Tv is that its monthly subscription is considerably more expensive than the former. So, you can keep this in mind while going for its subscription. 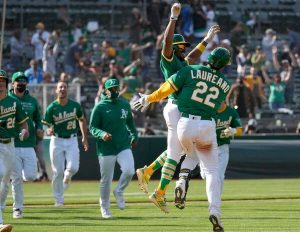 But even then if you are not fond of this opportunity, you can use some Reddit streaming source. The prominent one includes redditstreams.cc/mlb-reddit-live-streams. which uses some third-party websites to stream the A’s game. We do not encourage the use of these as they are associated with Malware and are linked with trackers and scams.

How to watch the Oakland Athletics in the USA?

Major league baseball is one of the most followed leagues in the USA. It is the world’s most prestigious league and is played in America. So, people here keenly observe the progress of their team. There are several national as well as regional channels that cover the A’s game. The prominent regional channel includes NBC sports California. While the national channels include the likes of ESPN, Fox Sports, and the MLB network. You can comfortably sit on your couch and watch the Athletics games with your loved ones.

But if you are too busy with your daily chores, still you can use your iPhone or android to watch the game. If you have access to MLB.TV, you can use their official app to watch the game live online. Some other online applications for this purpose include YouTube TV, ESPN Plus, and FuboTV.

Here are the links to your favorite TV streaming sources that you can acquire to watch the A’s live coverage.

How to watch the Oakland Athletics live streaming online in the UK?

In recent years, the UK has observed an increase in the MLB following. So keeping in view this situation, BT Sport obtained the right to telecast all the live action of the MLB in Britain and its suburbs. You can catch all the live-action of the A’s games on BT Sport ESPN. if you do not have the time to sit and watch the game on the TV, you can also use their online application. But for that, you have to acquire their 25 pounds monthly subscription.

ESPN player is also another application that can help your cause. It is available all around the globe with the exception of some third-world countries.

Where can I watch the highlights of the Oakland Athletics?

The MLB has launched its official Youtube channel where it sharply uploads all the national and American league games highlights. So, now you can enjoy the high-quality highlights of the A’s game on Youtube. One of the major standout aspects of these highlights is that it covers most of the important actions of the games in a short period of time.

And secondly, if you have got a subscription to the MLB.TV, you can watch the highlights on its official application as well.