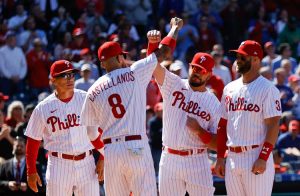 Philadelphia Phillies are currently sitting in first place in the National League East division. The Phillies have enjoyed a fair bit of success this season. And are looking strong to make it into the next rounds. It will be the first time since 2011 that Phillies will enter the postseason. They had a really tough time in between this period as the Pennsylvania team found it hard to make significant inroads. Now they have a very good chance of rectifying their miserable recent record. Here in this article, we will share all the possible Philadelphia Phillies live stream sources that you can use to watch their game online.

The Phillies are currently enjoying an 8 win streak that has lifted them at the top of the East division. They had a slow start to their season but it seems like things have begun to come together for them at the right moment. So, it will be hard for other teams to stop the in-form Phillies.

The first baseman, Rhys Hoskins is leading the charts for most home runs this season by a Phillies player. 28 years old Hoskins has already hit 24 homers to go along with 68 RBI’s. He is well complemented by the former MVP Bryce Harper. Harper has found his groove lately and has contributed to the recent win streak. He has recorded an exceptional .302 batting average this season. The former Washington Nationals star will be the key to the success of the Phillies this postseason. And the fans will be hoping that Harper can bring his best when needed by the team.

How to watch the Philadelphia Phillies live streaming online?

There are many ways to watch the Philadelphia Phillies games online. But nothing is better than the league’s own coverage of the games. MLB.TV provides its viewers with the opportunity to watch the Phillies games on TV as well as online with the same subscription. So, if you have bought their monthly subscription you can watch their game online on the MLB application. But one of the most frustrating features of this streaming is that you won’t be able to watch the game live if you are located in Philadelphia. So, this application is best suited for those fans who follow more than one team in the league.

The best application available for the home team fans is  AT&T TV. AT&T TV allows watching the Phillies games from anywhere in the country. So, now you do not have to worry whether you are located in Philadelphia or any other state. It covers almost all the channels streaming the Phillies games. 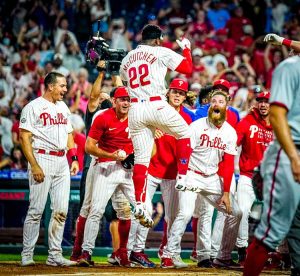 Where can I watch the Philadelphia Phillies for free?

Most of the applications mentioned in the above section are paid ones. But people are reluctant to buy these subscriptions as it drains money fair amount of money from their purses every month. Here in this section, we will mention some of the sources that are not very pricy and some of them are absolutely free.

Sling TV is one of the most renowned Tv streaming sources that offer it, newbies, with a 3-day free trial. You can use this offer online as well. After that, you can acquire their monthly or annual subscription that is available at a reasonable price.

Besides it, Hulu + Live TV also provides a similar starting offer to its new customers. It offers a 7-day free trial but comes at a little higher price than the former one. So, looking at the prices of both the sources, it will be easier for most of you to go for Sling TV.

Apart from these, you can use some of the unsanctioned live streaming sites. The sites leading the chart for this purpose are Reddit sites. These sites have gained immense popularity all around the globe. But one of the major drawbacks of their use is that they are associated with malware. They are also linked with trackers and are annoying as the ads frequently interrupt the live streams.

There are some other sites like sports surge and hesgoal that stream the Phillies games regularly. They are also available free but again there are similar problems with these as mentioned for Reddit sites.

For Sling tv and others, you can visit their sites from here.

How to watch the Philadelphia Phillies in the USA?

You can use the official MLB app designed to assist both iOS and Android users with live online streaming. The other online sources that you can use to watch the Phillies game live in the USA are YouTube TV, ESPN Plus, and FuboTV. Most of them are paid ones but are available at a quite reasonable price.

Youtube also streams one game per week for the last three years. So, if you are lucky enough, you might be able to watch the Phillies game on Youtube for absolutely free.

Where can I watch the Philadelphia Phillies in the UK?

BT Sport is the leading broadcaster to air the MLB and Phillies games in the UK. you can watch the Phillies games on BT Sport ESPN channel on your TV headset. But if you are not very compliant with it, you can also use their online application. But for that, you have to buy an extra 25 pounds monthly subscription which is not a bad deal considering the quality of the streaming.

You can also use ESPN player to watch the live game of the Phillies online. It is available all around Britain and Europe.