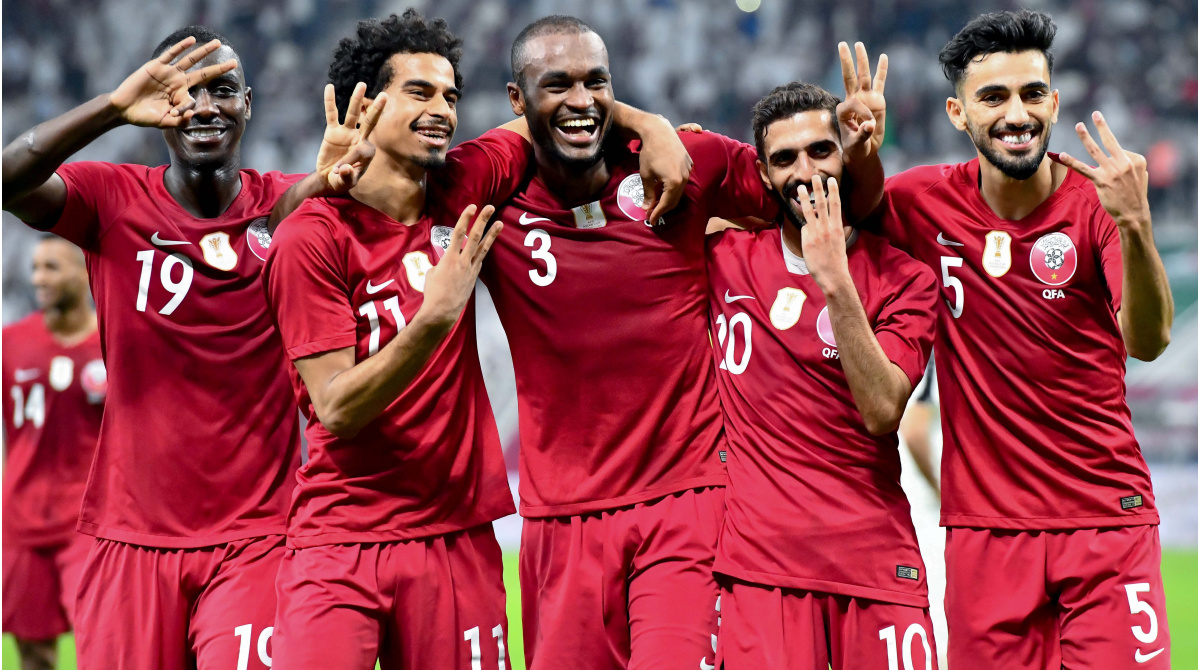 Qatar National Team will qualify for the World Cup as the host nation. This is the very first time Qatar will feature in the FIFA World Cup. As debutants, Qatar national team poses a considerable challenge to the other top teams. Within Asia, the Maroons are one of the best-drilled sides currently. Their latest international tournament was the FIFA Arab Cup, where they secured a third-place finish.

Abdelaziz Hatem scored the lone goal for Qatar national team to beat Bahrain in the opening game of the Arab Cup. They capitalized on the first win to go on and win three games on the trot that would eventually place them up in the semifinals of the competition. The first victory came against Oman with a 2-1 margin. The next two were handsome 3-0 and 5-0 victories against Iraq and United Arab Emirates (UAE) respectively. Almoez Ali bagged a brace against UAE.

In the resulting semi-final, the Qatar team was paired up against Algeria. The game run neck to neck until Algeria’s Youssef Belaïli scored the winning goal within injury time. The Maroons had to make peace with a shot at finishing third in the competition. They took on Egypt in the game for third place and won it on penalties after the quota of 120 minutes couldn’t produce a goal.

Almoez Ali was the top scorer for Felix Sanchez’s men in the Arab Cup. While they are a force to reckon with in the Asian and African football world, they indeed struggle to keep out European opponents. The Qatar national team played a couple of International friendlies with European teams before starting their Arab Cup campaign but they weren’t satisfactory in their performance. They lost 4-0 to Serbia and they drew 2-2 against Azerbaijan.

The Qatar national team won five of their four games in the Arab Cup. The only loss came in the semifinals against Algeria which ends up spoiling their otherwise clean record of six games unbeaten run. Currently, they are riding on one single win, against Egypt in the third-place game. They have two difficult friendlies scheduled for March 26, and 29, against Bulgaria and Slovenia respectively.

None of the Qatari players face any running injury problems or suspensions on disciplinary grounds. They are in good shape to move into the World Cup with a fit squad and give their best shot at progressing as deep as they can into football’s biggest competition.

Strength and weaknesses of the Qatar team

While Felix Sanchez’s Qatar Football team are well drilled to winning the ball in key areas, keeping things tight defensively, and scoring good goals, they are no match for larger footballing powers, primely Europeans. The friendlies against Serbia and Azerbaijan should serve as good examples considering they aren’t even top European teams.

The Qatar Football team is a midfield dependent side and the top players, Akram Afif, and Abdelaziz Hatem stand out as creative and finishing outlets. The defense is also strong by Asian standards with players like Pedro Miguel, Boualem Khoukhi, etc. running in fine form.

As stated earlier, Qatar national team’s prime force is its midfield. Hence, veterans like Akran Afif and Abdelaziz Hatem would be key contributors to the Qatari campaign at the World Cup. Almoez Ali has stood out as Qatar’s best goal-scoring forward and he’d be another major key player for them. Defenders Boualem Khoukhi, Abdelkarim Hassan, and Homam Ahmed are important members of the Qatari backline.

Qatar national football team players to watch out for

The left-back Homan Ahmed has made considerable progress for a 22-year old. He is one player who could break out from this tournament with the advantage of playing on his home soil. He could have his future in a European club and would be a worthy player to keep an eye on.

Other 22-year-olds include the set of attacking midfielders Mohammed Waad and Mohammed Al Bayati. While not as well established as Homam Ahmed, these two would also be looking for their light bulb moment in the Qatar National team kit.

In Nepal, coverage is available on Net TV Nepal and Sim TV Nepal. For Sri Lanka, coverage can be watched on SLRC (Eye Channel), Dialog TV, and PeoTV. In the Maldives, Medianet will replicate Sony’s coverage. Sony Network’s official OTT platform called Sony Liv will also feature the coverage through its website and mobile/PC applications.

In the UK, the broadcasting rights of the Qatar World Cup 2022 lie with the BBC. Viewers in UK will be able to catch the games on the ITV website and applications, the BBC iPlayer, BBC News, and BBC Sport. This is the best resort for Qatar live football TV streaming.

In the USA, Fox Sports has exclusive rights for English telecast and Telemundo will have all the action in Spanish. To catch the action on OTT, viewers can turn to fuboTV, SlingTV, Hulu+ Live TV, AT & T TV Now or Youtube TV live streaming football.

Al Jazeera along with beIN Sports will telecast action for the viewers in the middle east and North Africa. The 2Sport2 will telecast for the host nation, Qatar, and pay-TV will do the same in Russia. Antenna TV will handle telecasts for Greek spectators. In Italy, Rai has exclusive rights. As does the MEDIAPRO network in Spain.

Qatar Match Live Stream will be easily available on various platforms. The FIFA World Cup is arguably the biggest sporting event in the World. Hence, there would be a lot of platforms that would provide streaming services for the same.

For paid services, OTT platforms like Sony Liv, BBC iPlayer, Hulu +, and YouTube TV will be the best place. Fans can rely on these services if they have a subscription. For fans who would like to stream these fixtures for free, here is a list of recommended Qatar live football streaming sites. These will be helpful for FIFA World Cup Live Streaming.

Major governing bodies of football like UEFA, FIFA, Conmebol, AFC, etc. will also extend their own broadcast services for free. This will be available through their official sites or a YouTube or Facebook live stream extension for the whole Qatar World Cup schedule. These streams being official in nature should be reliable for diehard fans. This is the best free live football streaming solution. We at Sports404 will update all information regarding Qatar live football TV streaming services as and when we information surfaces around Qatar 2022 World Cup.