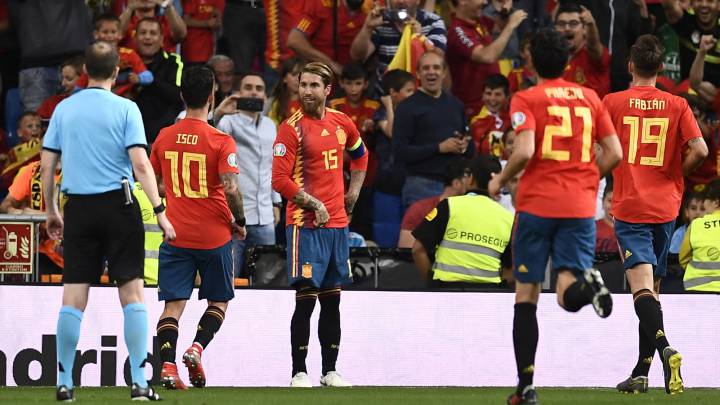 La Roja started with a draw against Greece to kick start their campaign. Alvaro Morata and Anastasios Bakasetas were the two scorers on either sides. Greece is always a hard nut to crack but moving forward, the Spain National team was further troubled when they went down 1-0 to Georgia within the first half. Thanks to a comeback victory with goals from Ferran Torres and Dani Olmo, Spain snatched the win within injury time.

With the first win in the bag, the Spain national team went on to showcase some beautiful football at home against Kosovo as they won 3-1 with goals from Torres, Olmo, and Gerrard Moreno. The high flyers were humbled by the Swedish in the next game after Carlos Soler had put La Roja 1-0 up within five minutes. Alexander Isak equalized in the very next minute and Viktor Claesson’s goal in the 57th minute remained the difference between the two sides.

However, the Spanish squad was quick to shake off that one bad day as they went on to take advantage of the next game at home against Georgia. They scored four through Jose Gaya, Torres, Soler, and Pablo Sarabia. The good form continued and so did the clean sheets as Spain didn’t concede in any of the qualifying games since that humbling loss to Sweden.

They won 2-0 against Kosovo, 1-0 against Greece, and completed their revenge on Sweden with another 1-0 victory to close off their qualifying campaign. They accumulated a total of 19 points from their eight games; six wins and one each of draws and losses. Ferran Torres remained the highest scorer for the Spain national team with four goals.

The Spain national team also played the European Championship sandwiched between the Qualifiers. They reached the semifinals in the continental competition and were knocked out by eventual winners Italy who defeated them on penalties after a 1-1 scoreline at the end of 120 minutes. Alvaro Morata was Spain’s top scorer for Euros with three goals.

Luis Enrique’s Spain Football team has looked largely consistent throughout the many competitions. They hit a rough patch between being knocked out of the European Championships by Italy and a humbling defeat at hands of Sweden. Since then they’ve been on a winning streak of four matches.

The Spain team has their friendlies scheduled against Albania on March 26 and Iceland on March 29. After these, the Spain national team is all set to gear up for the UEFA Nations League in June where they take on Portugal for their first game. Spain’s squad has two major injury concerns, both muscular. First, the central midfielder Koke has been unavailable since February. The left-back Jose Gaya picked up a muscular overrun and is expected to be back before the International Friendlies scheduled in March 2022.

Strengths and weaknesses of the Spain football team

La Roja is known for its quick linkups and midfield domination. Also called, ‘Tiki-Taka.’ Although this side is very different from the older Spanish sides that humiliated their opposition with their sublime passing, the younger players like Pedri and Gavi are very capable of the same. We saw how Pedri broke out in the Euros through his masterful midfield play. The midfield stands out in terms of passing and creativity.

The only weakness in the current Spain team is the lack of a good backup striker. Spain is largely dependent on midfield play to create opportunities through the wider spaces. Their wingers or advanced midfielders get most of their goals whereas there is a clear void created when the first-choice striker, Gerrard Moreno isn’t available. There is Alvaro Morata but he has been a hit and a miss.

The Spain Football team has several established first-team stars in their squad. All of them play their football in top European clubs and the list of key players becomes long in the case of Spain. However, Aymeric Laporte would have a crucial role in the backline and Chelsea’s captain Azpilicueta will have to assume leadership of this squad and lead the fullback play.

Gerrard Moreno would be Spain Team’s primary goalscorer and considering the form David de Gea has been in, he’d end up being key as well if Unai Simon is stripped of the first-choice position. Defensive midfield mainstay, Sergio Busquets will always be key as long as he continues playing for Spain National team.

Spain national football team players to watch out for

Barcelona’s latest find, Gavi is the one player that viewers should keep a special eye on. The young man has become a key player under Xavi Hernandez and he’d be looking to replicate his success at the club level on the International stage as well. Brahim Diaz could also be a potential breakout star if he is finally called up by Luis Enrique. He has well proven how effective he is as a creative presence, he can play a crucial role as an advanced playmaker playing ahead of a set of holding midfielders.

In Nepal, Sony’s services are available on Net TV Nepal and Sim TV Nepal. For Sri Lanka, the same service are available on SLRC (Eye Channel), Dialog TV, and PeoTV. In the Maldives, Medianet will provide Sony’s services to the viewers. Lastly, Sony’s OTT platform called Sony Liv will also provide coverage through its website and mobile/PC applications.

In the UK, the BBC possesses exclusive broadcast rights. Viewers should be able to watch these games on ITV website and applications, BBC iPlayer, BBC News, and BBC Sport. These are options for the best free Spain live football TV streaming.

Fox Sports has bought the rights for English telecast in the USA. The Spanish network – Telemundo did the same for telecast rights in Spanish. To catch the action without tuning into your TV, viewers in the USA can turn to OTT platforms like fuboTV, SlingTV, Hulu+ Live TV, AT & T TV Now or Youtube TV live streaming football.

Al Jazeera and beIN Sports will telecast action for the middle east and North African region. The 2Sport2 will serve the viewers of Qatar, and pay-TV of Russia. Antenna TV will handle telecasts within the Greek peninsula. In Italy, Rai has official broadcasters’ rights. MEDIAPRO Network has the same in Spain.

Bell Media will broadcast in Canada. Brazil’s largest media company Globo will handle broadcasts as well. They’ll do so in Brazil and the Caribbean. China Central Television (CCTV) will broadcast action for Chinese fans.

Various free and paid platforms will provide Spain Match Live Stream. FIFA World Cup is arguably the biggest sporting festival on the Planet. Hence, there would be a lot of sources that would provide streaming services.

For paid services, official OTT partners like Sony Liv, BBC iPlayer, Hulu +, and YouTube TV work well. Fans can blindly rely on these services if they have a paid subscription of the same. For others who would wish to stream these games for free, here is a list of recommended Spain live football streaming sites. These will feature FIFA World Cup Live Streaming.

If looking for more options, all major governing bodies of football like UEFA, FIFA, Conmebol, AFC, etc. will extend their own broadcast services for free. Possibly through their official sites or a YouTube or Facebook live stream extension for the whole Qatar World Cup schedule. These streams are official and reliable. The best free live football streaming is surely this one. We at Sports404 will update relevant information on Spain live football TV streaming services as and when new information shows up around Qatar 2022 World Cup.