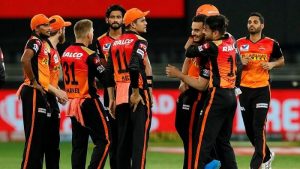 This amazing team has a total number of 26 exceptional players. All the team members of SRH will be going to Chennai to compete in the early matches of IPL.

What is the schedule of Sunrisers Hyderabad 2021?

The fans have been eagerly waiting to see the team of Sunrisers Hyderabad play their first match in the Indian Premier League. The first match will take place on April 11th, 2021. Here is the complete schedule of the matches which the SRH team will be playing in the IPL along with the venue of the games.

Who are the players in the team of Sunrisers Hyderabad?

There is a total of 26 players in the team of Sunrisers Hyderabad. The team is captained by David Warner who is an opening batsman while Kane Williamson is the Top-order batsman and Mitchell Marsh is an all-rounder. Other players include Abdul Samad (batsman), Abhishek Sharma (Bowler), Khaleel Ahmed (Bowler), Priyam Garg (Top-order batsman), and Jonny Bairstow (Wicketkeeper-batsman), and Basil Thampi (Bowler). Moreover, the team includes Shreevats Goswami (Wicketkeeper-batsman), Jason Holder (Bowling allrounder), Kedar Jadhav (Batting allrounder), and Siddarth Kaul (Bowler), and Bhuvneshwar Kumar (Bowler).

How can I watch the Sunrisers Hyderabad live stream in India?

Moreover, there are various other options as well aside from watching live streaming on television. You can watch the live streaming of Sunrisers Hyderabad on digital platforms as well. For instance, the matches will be broadcasted on Hotstar as well as on Disney. All you need to do is to get a subscription to these platforms. Hotstar and Disney have also paired up with Airtel and Jio.

All of the above-mentioned options are also available in several other south Asian states. Such as Bangladesh, Maldives, Sri Lanka, Bhutan, and Nepal.

How can I watch the Sunrisers Hyderabad live stream in the US and UK?

Moreover, the fans in the US and UK can watch the live streaming on Hotstar as well which is now available in both these states. Fans can get a subscription to Hotstar on a monthly or yearly basis.

How can I watch the Sunrisers Hyderabad live stream in other countries?

YuppTV is an excellent platform that will provide live coverage of all the IPL matches to about 60 territories. Those territories include France, Turkey, Spain, Switzerland, Russia, Sweden, Denmark, Serbia, Georgia, Norway, Malta, Italy, Hungary, Greece, Azerbaijan, Romania, Poland, Germany, and many more.